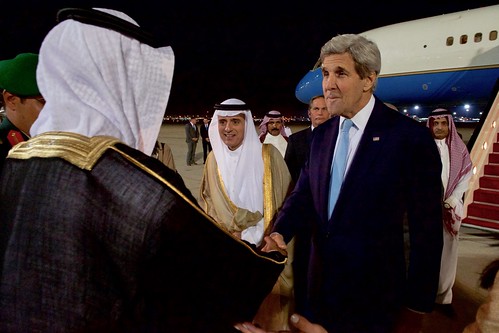 By now, few doubt that Jamal Khashoggi is dead. It is most likely that the Saudi journalist -- who once advised kings and billionaires -- was killed by an interrogation team sent from Saudi Arabia to meet him in Turkey. If this was the case, then it is impossible for the hit on Khashoggi to have taken place without a green light from the Crown Prince, Mohammed bin Salman (affectionately known as MBS). The Saudi royal palace would have signed Khashoggi's death warrant because he had turned on the kingdom he otherwise loyally served. Nothing in Jamal Khashoggi's career suggested that he would become a dissident. But, MBS had consolidated power against the fragile balance within the royal family and he had arrested and humiliated Khashoggi's friends, including Al Waleed bin Talal of Twitter and Goldman Sachs. Khashoggi's dissent was the complaint of one fraction of the ruling elite against another. If he were an unknown Saudi blogger sitting in Virginia, fulminating for a miniscule readership, he would have been left alone. That he represented powerful interests inside the kingdom made it impossible for him to survive.

Saudi Arabia is in the midst of an internal review of the death of Khashoggi. Whispers from inside the kingdom suggest that the final report will say that this was a "rogue" operation, a word introduced into this incident by U.S. President Donald Trump. Trump, who has bet a great deal on Saudi Arabia, has been caught flatfooted. He did not want this scandal. He thought that disavowing Khashoggi -- because he was a permanent resident of the U.S. rather than a U.S. citizen -- would make the case disappear. But it has not, largely because Khashoggi has close friends in Washington, D.C. (including colleagues at the Washington Post), because he is so well-connected inside Saudi Arabia, and because the Turkish government -- which is in a long-term tussle with Saudi Arabia -- will not let the matter drop. Even a substantial bribe from Saudi Arabia was rebuffed by Turkey. This news is not going anywhere.

Pressure came upon Trump to at least block U.S. arms sales to Saudi Arabia. But, Trump is a pragmatic man. He knows that this would do two things he cannot afford -- it would show that the U.S. does not stand by its allies, who might then seek allies elsewhere, and it would jeopardize the massive arms deals that the U.S. arms manufacturers have signed with the Saudis. Buying arms from the United States has come into use in Saudi Arabia's insane war against Yemen, but more than that it has always been an insurance policy, a way to recycle Saudi petrodollars into the U.S. exchequer through arms deals. Not many U.S. politicians -- who have arms manufacturers in each district -- would be willing to throw Saudi Arabia overboard as long as it buys weapons systems that it mostly never used. Given this situation, Trump quite rightly ignored calls to stop the arms sales -- "I actually think we'd be punishing ourselves if we did that."

Why say that Trump was right to do what he did? It was not only because Trump wanted to maintain the U.S.-Saudi relationship. It was largely because Trump's industrial strategy relies upon weapons sales around the world. And this is not merely Trump's strategy. This has been the industrial strategy of the U.S. ever since manufacturing began to escape U.S. shores from the 1970s and ever since the USSR collapsed and Russian weapons manufacturing deteriorated (a situation remedied only recently).

It is worth pointing out that the U.S. has been the world's largest arms exporter for decades. It is also worth pointing out that U.S. arms exports have increased astronomically since 2008; it was arms manufacturing that was the fulcrum of the U.S. recovery from the credit crisis. Twenty percent of U.S. arms sales go to Saudi Arabia, whose appetite for U.S. weapons has increased by 448 percent from 2008-12 to 2013-17. This monstrous relationship that deposits Saudi petrodollars into the U.S. in exchange for weapons benefits the U.S. financial markets and the arms manufacturers -- two key fractions of U.S. capital.

In previous decades, the Saudis warehoused the arms, watching them rot and then be replaced with new arms. They were not buying arms as much as using the oil profits to underwrite the U.S. financial and arms industries. This was a Saudi bribe, an insurance policy, to the U.S. political class. It ensured that Saudi Arabia was a key ally of the U.S., and it bought the friendship of the U.S. politicians who made sure to shut down any conversation about human rights abuses inside Saudi Arabia -- and the very fact that it is a monarchy. U.S. presidents often talk of Saudi Arabia as an ally in the promotion of democracy, a witheringly bizarre tone that runs from liberal Democrats to arch-conservative Republicans.

Trump has been ferocious in his arms dealings. In the first half of 2018, the U.S. sold as many weapons as it did in all of 2017. This will be a record year. It is fated to continue in this vein. Arms will flow not only to Saudi Arabia, but to other Arab states, parts of the world that need to dry out from war rather than be put in the position where the gun becomes the solution to any problem.

Now, Saudi Arabia is using the arms sold to it by the U.S. and the UK in its barbarous war against the people of Yemen. Last year, Khashoggi made it clear that "when Saudi Arabia's war in Yemen erupted in March 2015, there was widespread Saudi popular support for it -- including by me." Khashoggi believed that Saudi Arabia must go to war to beat back an Iranian threat -- an illusionary story that the Saudis had been flogging since the Iranian Revolution of 1979. Two years into the war, Khashoggi said that the humanitarian crisis in Yemen -- entirely the fault of Saudi Arabia -- had "badly damaged" the kingdom's reputation, and it had weakened Saudi Arabia's credibility. Khashoggi called upon MBS to recognize all factions in Yemen as legitimate and to get serious about peace. This advice fell on deaf ears. The deafness of the palace annoyed people like Khashoggi, many of whom had full sympathy for the goals of the Saudi campaign but saw it poorly executed.

There is a full-blown humanitarian crisis in Yemen. That is true. But there has also been quite fierce military resistance to the Saudi and UAE war against Yemen. Plucky Yemeni forces from many factions have not permitted the Saudis to feel safe for a major land invasion. They have been restricted -- since 2015 -- to an aerial bombardment of Yemen, a destruction of its infrastructure that includes its crucial ports. Anyone who looks at the Saudi war in Yemen is quickly disgusted by its brutality, but they should also see the resistance of the Yemenis that has prevented the much-wanted Saudi victory.

But the Saudi war on Yemen has slipped off the radar. It was Khashoggi's disappearance that captured the imagination -- a macabre story of a man that many journalists knew. During the wall-to-wall coverage about Khashoggi's disappearance and now murder, Cyclone Luban struck Yemen's Al Mahrah governorate. Relief workers in the area say that the cyclone was very destructive and the governor of the province, Rageh Bakrit, tweeted photographs of the high flood waters. The "disastrous" conditions, Bakrit said, "surpasses our humble capabilities." He wants help, but help cannot easily get there. The Saudi war prevents assistance.

This is the fifth cyclone to strike Yemen since the Saudi bombing began. The war continues; children continue to die (five killed a day since the Saudi bombing began in March 2015). Nothing is going to stop that. Not Khashoggi's critical column nor his death. Nothing -- as long as Saudi Arabia pays those billions of dollar in insurance payments in the guise of arms purchases.

This article was produced by Globetrotter, a project of the Independent Media Institute.

Related Topic(s): Arming Saudi Arabia; Arms Sales; Trump Hypocrisy; Weapons, Add Tags
Add to My Group(s)
Go To Commenting
The views expressed herein are the sole responsibility of the author and do not necessarily reflect those of this website or its editors.