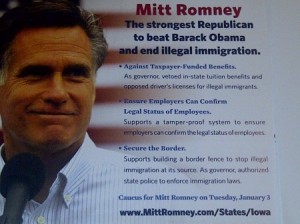 Mittens needs a bigger Etch-A-Sketch. His revised wishy-washy non-answers on immigration are not playing well against Obama's very popular policy positions. Not even Republican Rock Star Marco Rubio can justify Romney's evasions about the border issue. Romney gave Bob Schieffer a real workout on Sunday's Meet the Press, and refused to shoot straight on his position on immigration:

"The Republican presidential candidate was asked several times in an interview on CBS' 'Face the Nation' whether he would overturn the executive order issued Friday if he's elected in the fall. He refused to directly answer.

"'It would be overtaken by events,' Romney said when pressed for the second time by moderator Bob Schieffer during the interview taped Saturday while the former Massachusetts governor's bus tour stopped in Pennsylvania."

Overtaken by "events?" What kind of events? The landing of alien spacecraft? The return of the angel Moroni to whisk anyone of Hispanic heritage to their very own special planet? Too bad for Mittens that Google search engines easily produce scores of documents that clearly detail his thought about undocumented workers. He doesn't like them. Unless they mow the lawn at his mansion, that is. Think Progress reports:

"When asked by a reporter about his use of Community Lawn Service with a Heart, Romney said, 'Aw, geez,' and walked away. But in the past, Romney has been a vocal hardline critic of illegal immigration:

"'You have to have a wall or a fence or electronic surveillance. And you have to have a tamper-proof document to make sure that people who are here are aliens are identified and registered, and people can not hire them unless they're here legally.'

"Governor Mitt Romney is seeking an agreement with federal authorities that would allow Massachusetts state troopers to arrest undocumented immigrants for being in the country illegally. ... 'It's one more thing you can do to make this a less attractive place for illegal aliens to come to work,' said Romney."

Now there's a snappy campaign slogan: "Let's Make America Less Attractive to Immigrants." If elected, maybe he could get it on the Statue Of Liberty? Gee, and I thought that was the campaign slogan of the Bush Administration. No? Oh that's right, that one was "Lets Alienate Our Allies, Encourage Terrorism, and Make All the  Muslims Worldwide Hate Our Guts."

It's easy to get them confused at times.

Kathy never expected a career in radio as a talk show producer. Born and raised in Atlanta, Georgia, Kathy was completing her nursing degree when in 2001 - in an emergency - she was asked to fill in as the producer of Mike's program. Within a few (more...)
Related Topic(s): Illegal Immigration; Illegals; Mitt Romney; Republican, Add Tags
Add to My Group(s)
Go To Commenting
The views expressed herein are the sole responsibility of the author and do not necessarily reflect those of this website or its editors.