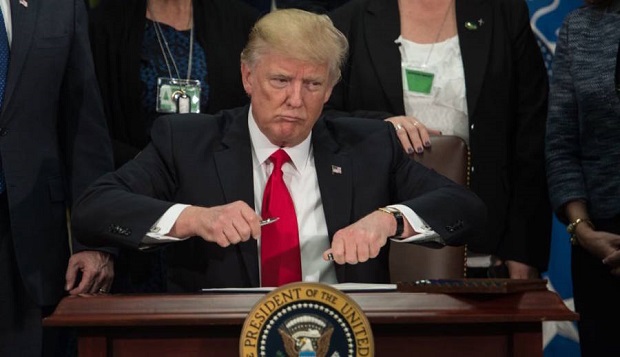 Anyone who has ever cared for a relative or a close friend suffering from dementia is well aware of the effects of this debilitating disease. Living with a dementia sufferer is as bad, if not worse, for the care giver as it is for the person afflicted. Obsessive compulsiveness, irrational outbursts such as inappropriate laughing, crying or yelling, insensitive bigoted comments, and voicing strange ideas are only a part of a dementia patient's overall symptoms.

In actuality, every person on the planet within range of a television broadcast is living with a dementia patient. Anyone within earshot of a speech or comment by Donald Trump is witnessing the effects of dementia. And, for Trump, the symptoms are progressively becoming more frequent and severe. When the 25th Amendment to the Constitution was enacted in 1967, there was not very much known about dementia and Alzheimer's disease. In those days, an elder who became feeble-minded was called "senile." Enough was known about senility and mental disability for the framers of the 25th Amendment to include any form of incapacitation of the president mental, as well as physical as ample reason for the vice president to replace him temporarily or permanently. The decision by the Vice President, Cabinet, and Congress not to invoke the 25th Amendment will historically serve as a blemish on them, regardless of their political party.

Perhaps the only beneficial accomplishment of Trump's term is that everyone now understands what it is like to live with a person suffering from dementia. Trump displays the signs of the ailment on a daily basis.

Dementia sufferers often seek the comfort of something they find familiar. This can take on such activities as shopping for unneeded items, particularly new clothes; watching certain types of television shows; and binging on unhealthy food, particularly chocolates and other candy. Trump's comfort obsession is golfing at his own country clubs. Trump recently canceled a trip to Poland to mark the 80th anniversary of the beginning of World War II. His reason was to remain in the United States to monitor the progress of Hurricane Dorian. Rather than spend his time at Camp David in Maryland, Trump was soon discovered to be golfing at his golf course in Sterling, Virginia. Since becoming president, Trump has visited his country clubs 213 times, where he golfed 149 times.

As Dorian was pummeling the Bahamas, Trump tweeted: "In addition to Florida South Carolina, North Carolina, Georgia, and Alabama, will most likely be hit (much) harder than anticipated." Later, at a Federal Emergency Management Agency (FEMA) briefing, Trump said, the hurricane "may get a little piece of a great place: It's called Alabama." The National Weather Service (NWS) in Birmingham, Alabama was forced to correct Trump's tweet, stating that Dorian posed no threat to Alabama. On September 1, displaying the irrationality of a dementia sufferer, Trump then countermanded the NWS in another tweet, while also singling out ABC News White House correspondent Jonathan Karl for an attack:

Such a phony hurricane report by lightweight reporter @jonkarl of @ABCWorldNews. I suggested yesterday at FEMA that, along with Florida, Georgia, South Carolina and North Carolina, even Alabama could possibly come into play, which WAS true. They made a big deal about this" ".when in fact, under certain original scenarios, it was in fact correct that Alabama could have received some "hurt." Always good to be prepared! But the Fake News is only interested in demeaning and belittling. Didn't play my whole sentence or statement. Bad people!

If a high school principal engaged in the sort of behavior that included promulgating false weather reports to faculty, students, and parents, the school board would immediately remove the individual from his or her position. Similarly, if the CEO of a corporation began making decisions on non-existent weather forecasts, the board of directors would terminate the individual from his or her job. Dementia gets progressively worse through rather well-defined stages. One stage is to remove the ability of those afflicted with dementia to operate a motor vehicle because of their inability to make rational decisions. Mr. Trump is well beyond that stage.

Trump also stated several times that he never heard of a Category 5 hurricane, even though Dorian is the fourth such hurricane to strike the United States during his term. On September 1, Trump said, "We don't even know what's coming at us. All we know is it's possibly the biggest. I have I'm not sure that I've ever even heard of a Category 5. I knew it existed . . . But a Category 5 is something that I don't know that I've ever even heard the term other than I know it's there." Incoherent babbling is a symptom of the overall voicing of strange ideas common with dementia patients.

Trump's dementia is recorded every day by television and Twitter. Trump's enablers at Fox News are providing Trump with a soap box from which he can incoherently ramble to a political base that seems to enjoy watching someone descend into severe senility. Trump's re-election campaign places their dementia-suffering candidate before arena crowds that fixate on Trump's every bigoted sentence.

Over the last few months, Trump has used an Asian accent to mimic the Prime Minister of Japan and President of South Korea before a crowd of fat cat donors in The Hamptons. He has reportedly refused to be photographed with his daughter Tiffany because he thinks she is too overweight. He insulted Denmark and Greenland over a bizarre plan for the U.S. to buy Greenland. Trump also rationalized the holding of the 2020 G7 conference at his Doral golf club near Miami, a clear violation of the emoluments clause of the Constitution. Trump repeatedly insults people a common trait with dementia sufferers using childish labels like "dopey," "sleepy," "dying," "clueless," "dummy," "stupid," "nasty," "wacky," "shady," "fat," "sloppy," "low-IQ," "little," "crazy," "cheatin'," "disgraced," "sneaky," "failed," "slippery," "horse face," "lowlife," "bozo," "psycho," "crooked," "tainted," "dumb," "phony," "sad," "mad," "racist," "dumb Southerner," "goof ball," "weirdo," "sleazy," "corrupt," "flakey," and "fake." No corporate board of directors would tolerate such antics from one of its executives. A dementia patient would be confined to his or her room if they hurled such insults in a clinic lobby with visitors present. America's most well-known insult comics Don Rickles, Sam Kinison, Lisa Lampanelli, Jack E. Leonard, Andrew Dice Clay, Fred Allen, Groucho Marx, Phyllis Diller, Redd Foxx put the insult act away when they were not performing. In fact, Rickles, the "King of Insult Comedy," was described by his friends as one of the warmest people, offstage, they had ever known. There is no "offstage" moment for Trump. This is not some sort of comedic shtick, but the symptoms of a severe condition brought on by dementia.

Trump is clearly disconnected from reality. He is a degenerate version of the character "Chauncey Gardiner" in the 1979 movie "Being There." All Chauncey's knowledge came from his garden or what he saw or heard on television, making it next to impossible for him to deal with the outside world in Washington, DC. Trump makes decisions based on what he sees and hears on "Fox & Friends," which seems to provide him security in his comfort zone.

As someone who has cared for a close relative who suffered from dementia, I don't really care to have to be exposed to Trump's rapid mental decline for practically every waking hour of every single day. Washington should stop obsessing over hearings, witness testimony, subpoenas, emoluments, and other political gamesmanship and invoke the 25th Amendment in order to put Trump where he belongs in a medical facility that specializes in the treatment of dementia and Alzheimer's patients. Trump needs the treatment and we need a rest.