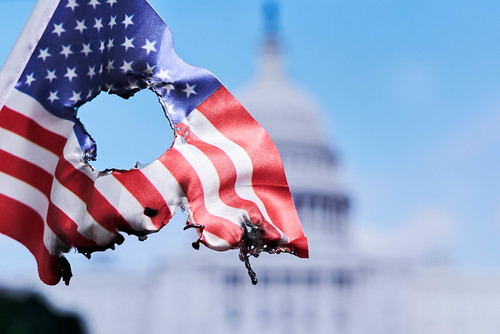 Three weeks ago the United States of America experienced something it never should have.

Although the attempted Capitol coup d'etat on January 6 did not elicit the outcome Donald Trump and his ardent supporters intended--namely overturning the democratic election that certified President Joe Biden's win--it successfully demonstrated how fragile our republic is and how close we came to losing it.

While the F.B.I. attempts to sweep up all the perpetrators, over 135 of whom have been captured, new information is coming out every day to suggest the Capitol siege was an inside job.

Trump loyalists all over the country had been planning insurrections for months, acting on Trump's insistence either he win or the election is rigged.

Police agencies all over the country were preparing for unrest for months.

There was even some in D.C. in December.

Two days before the Jan. 6 melee, The Hill ran the headline "DC braces for pro-Trump protests amid Electoral College challenge."

Back in June, the Transition Integrity Project (TIP) helped organize a bipartisan group of Democratic and Republican officials to simulate the day after a possibly contested election, for which every scenario resulted in "street-level violence."

We now know in the week leading up to the insurrection that killed several people, including police officers, top Trump campaign fundraiser Caroline Wren contacted "constitutional conservative" Cindy Chafian via text message about managing operations, logistics, budgeting, funding, and messaging for the Trump rally that culminated in violence.

"On Dec. 29, after receiving the budget, Wren instructed Chafian, via text, to hold off on printing event-related slogans 'until we decide what the messaging is and we have no clue on timing because it all depends on the votes that day so we won't know timing for a few more days.' The 'timing' appears to be a reference to Congress' Jan. 6 vote to certify the election results."

That brings us to Jan. 5, the night before the "event."

Related Topic(s): Capitol; Congress; Conspiracy; Coup Attempt; Election; Far-right; Police; Treason; Trump; Violence, Add Tags
Add to My Group(s)
Go To Commenting
The views expressed herein are the sole responsibility of the author and do not necessarily reflect those of this website or its editors.