The onetime Republican golden boy has never recovered from his failed presidential run. 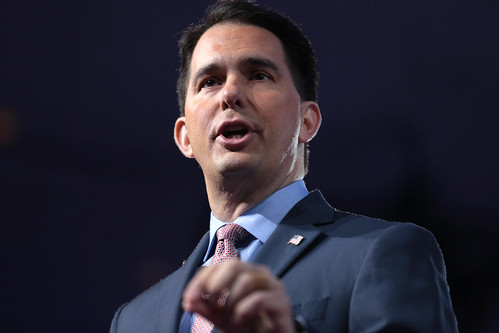 Wisconsin Governor Scott Walker really would have preferred to be sitting in the White House just now. But he got trumped in his bid for the 2016 Republican nomination by a candidate who was better at practicing the "divide-and-conquer" politics that the anti-labor zealot pioneered in the upper Midwest.

Walker briefly led Republican presidential polls in 2015. Then he was shredded by Donald Trump, who turned the hapless front-runner's record into a negative -- telling conservative crowds that"Wisconsin's doing terribly. First of all, it's in turmoil. The roads are a disaster because they don't have any money to rebuild them. They're borrowing money like crazy... The schools are a disaster, and they're fighting like crazy because there's no money for the schools. The hospitals and education is a disaster."

That blunt assessment from a fellow Republican exposed Walker as a blustering bumbler who got high marks from right-wing media but low marks for actual accomplishments. Walker's presidential poll numbers tanked -- so completely that he quit the race as an asterisk. Always quick to put party ahead of principle, Walker soon pledged his loyalty to the man who had crushed his own ambitions, and became President Trump's errand boy in the heartland.

Now the governor who dreamed of being president is stuck in Wisconsin, slogging his way through another run for the job he tried to put behind him. It is not going well. The Real Clear Politics survey of recent polls has Democrat Tony Evers, the state's mild-mannered superintendent of public instruction, leading Walker by four points.

The "help" that Walker is getting from Trump, who is flying into the state this week to campaign for his Midwestern minion, may not be all that helpful -- as the president's approval rating is lower than the governor's, and independent voters surveyed for the respected Marquette Law School Poll now disapprove of Trump 52-42.

Related Topic(s): Election; Politics; Polls; Scott Walker, Add Tags
Add to My Group(s)
Go To Commenting
The views expressed herein are the sole responsibility of the author and do not necessarily reflect those of this website or its editors.