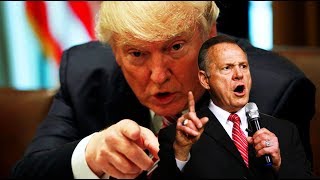 It's D-Day in Alabama and the stakes couldn't be higher. For Republicans. It's a win-win for Democrats either way, really. But the Moore-Jones special election is symbolic of our entire, divided nation right now. And it could define the future of the GOP. Will they stand with racists, pedophiles, bigots, fake news perpetrators and liars...or with the sane folks who aren't yet completely mesmerized by Fox News?

Roy Moore rode into town today on a horse named "Sassy" and pulled the lever for himself, with his big-haired wife Kayla beside him. She sure don't like no Mitch McConnell. Moore declined to answer any questions about how he'll deal with ethics investigations if he wins today, that's for later. Today was for Kayla, and Sassy.

Perhaps caving to some of the pressure from his own sexual harassment/assault accusers, Trump today took to Twitter to call New York Senator Kirsten Gillibrand a whore. Well, not exactly. But he said she "begged" him for money and "would do anything" for contributions... wink-wink.

"Lightweight Senator Kirsten Gillibrand, a total flunky for Chuck Schumer and someone who would come to my office "begging" for campaign contributions not so long ago (and would do anything for them), is now in the ring fighting against Trump," the president tweeted shortly after 8 a.m. "Very disloyal to Bill & Crooked-USED!"

Just when you thought he couldn't stoop any lower, Trump finds a new bottom to scrape. This tops even his support of the Britain First violent neoNazi group, and outspoken disdain for Prime Minister Theresa May.

Kathy never expected a career in radio as a talk show producer. Born and raised in Atlanta, Georgia, Kathy was completing her nursing degree when in 2001 - in an emergency - she was asked to fill in as the producer of Mike's program. Within a few (more...)
Related Topic(s): Donald Trump And Roy Moore; Ethics; Neonazi; Republican; Twitter, Add Tags
Add to My Group(s)
Go To Commenting
The views expressed herein are the sole responsibility of the author and do not necessarily reflect those of this website or its editors.