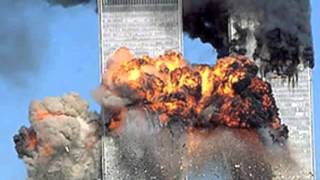 It seems so long ago. Many, most Americans probably don't think about it at all, absorbed it osmosis like years ago, thus out of mind only to be dredged up each anniversary.

As was done after the Kennedy assassination 9/11 has been studied, analyzed, commissions established, articles written, videos produced, books written and "official" findings produced and published essentially closing the book as it were.

But like the Kennedy assassination, new findings and disclosures challenge the "official" findings of 9/11.

Among those newer findings are "Architects and Engineers for 9/11 Truth" [1] questioning the collapse of World Trade Center Building 7, the lesser known of the World Trade Center buildings that collapsed that day. It wasn't hit by an airplane and "officially" published accounts had this 47 story steel building brought down by uncontrollable fires; the first ever steel building to collapse from fire alone. A video of Building 7 shows it collapsing on its own footprint similar to the controlled demolition of old high rise casinos in Las Vegas.

As for the twin towers themselves, also steel fabricated buildings that were hit by airplanes the "official" findings have them collapsing from fire initiated from the jet fuel of the planes.

The "official" findings make no reference to explosives heard by eye witnesses prior to the buildings' collapse and no reference to thermite found in the debris. Thermite is used to melt steel and when combined with explosives are known to bring down steel buildings in controlled demolition. Such witnesses were never interviewed or brought forth in the "official" investigation. There's also Barbara Honegger's [2] investigative reporting on the 9/11 Pentagon attack.

As to the planes crashing into the twin towers. Could they have been remotely controlled from the ground? The technology existed at the time whereby the pilots control of the plane could be over-ridden by a remotely controlled system. [3] In 1984 a 'Controlled Impact Demonstration' a "controlled impact operation was outlined as an innocuous flight study for safety but it's important to keep in mind that this was one of the first pieces of evidence that a large commercial airliner could be flown by remote uplink...a full 17 years before 9/11."

Could such a remotely controlled system brought down the plane that crashed into the rural Pennsylvania countryside on that day?

As to the plane that crashed into the Pentagon it too could have been remotely controlled-but reference Barbara Honegger's video for a more in depth account on this event.

Needless to say questions abound challenging the "official" version of 9/11 as the world changed over the events of that day.

Retired. The author of "DECEIT AND EXCESS IN AMERICA, HOW THE MONEYED INTERESTS HAVE STOLEN AMERICA AND HOW WE CAN GET IT BACK", Authorhouse, 2009
Related Topic(s): September 11 Attacks, Add Tags
Add to My Group(s)
Go To Commenting
The views expressed herein are the sole responsibility of the author and do not necessarily reflect those of this website or its editors.