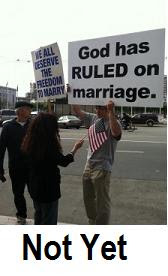 BREAKING (10:05 PST): THE RULING STAYS! Prop 8 is UNCONSTITUTIONAL! CLERGY ON THE READY WILL BE PERFORMING CEREMONIES

Live blogging is very difficult, especially when you've got to follow something like Prop 8 in California. But it's got to be done. The news has hit the streets and reactions will be analyzed.

But first, a message from our sponsor: marriage equality .

There's no doubt about it: marriage equality is the defining issue of the culture war as it stands. Not even abortion comes close. A panoramic view of how widespread it has become is needed.

National foes of marriage equality include The American Family Association, The Family Research Council, the Catholic Church, Focus On The Family, the Mormon Church, The Southern Baptist Convention, National Organization for Marriage (NOM), Concerned Women of America, and the Tea Party.

The California Proposition 8 saga will go down in history as one of the defining issues of our times. It consumed all of the culture warriors in the country, because: "as goes California, so goes the country." The state of California is the largest (population-wise) in the country (nearly 10%) and the sixth largest economic entity in the world. Whatever the Right/Christian Right says about California and its components (e.g. "Hollyweird"), it cannot deny California's influence" and the thing it hates about California the most: its diversity. California is everything to everyone.

When Prop 8 first reared its rather ugly head, the nation saw just how powerful -- and desperate -- the Christian Right was to maintain control over marriage laws. For the first time, one state's proposition drew (massive amounts of) outside money and people were bused across state lines to help with the campaign. Notable figures like Rick Warren filmed public service announcements. Battle lines were drawn. Prop 8 banners were either displayed prominently or vandalized.

"That was four years ago, this is now."

Rev. Dan Vojir is has been writing/blogging on religion and politics for the better part of ten years. A former radio talk show host (Strictly Books " Talk America Radio Network) and book publisher, Dan has connected with some of the most (more...)
Related Topic(s): Christian Right; Gay Equality; Gay Lesbian Rights; Gay Rights; Gay Wedding; Judge Vaughn Walker; Marriage Equality; Prop 8; Proposition 8; Same-sex Marriage, Add Tags
Add to My Group(s)
Go To Commenting
The views expressed herein are the sole responsibility of the author and do not necessarily reflect those of this website or its editors.