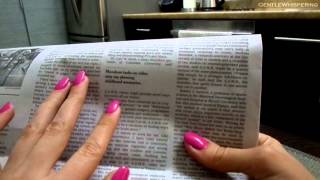 Friends often ask me why I spend so much time reading print versions of newspapers. I respond with the usual general reasons about learning what is happening, worsening or improving, in the world. I also point out that I send people helpful clippings.

Unfortunately, responses do not get many people to expand their print newspaper reading time. Some recent topics that caught my attention might encourage you to revisit the printed version of your newspapers:

"It's the middle of the night. Do you know who your iPhone is talking to?" The Washington Post's Geoffrey A. Fowler says this is not true. With his screen off, he showed 5,400 hidden app trackers guzzled his data in a single week. Shame Apple and CEO Tim Cook. You lied.

"Take a Page From Kids Who Care" The Washington Post's Christina Barron starts with the now famous Greta Thunberg's weekly protests on climate disruption before the Swedish Parliament and goes on to reference eight new books "in which kids engage, in ways big and small, to better the world."

"Why I'm Swearing off Trump's Nicknames," by Karen Tumulty of The Washington Post. About time a writer did this. When will reporters stop being Trump's bullhorn for his scornful, ugly nicknames, without printing rebuttals or nicknames coined by Trump critics like "Draft-dodging Donald," or "Lying Donald," or "Corrupt Donald," for example.

"MacKenzie Bezos Pledges to Give Half of her $36 billion Fortune to Charity," by Washington Post's Rachel Siegel. One very rich couple's divorce may mean better lives and saving lives for many people if Ms. Bezos spends money to promote justice and we might need less charity. Her Foundation is coming.

"The Shadow Banks are back with another Big Bad Credit Bubble," by The Washington Post's incomparable Steve Pearlstein. With weak or no regulation of these speculators/lenders, there may be a replay of the 2008 financial crisis.

"Many teens sleep with their phones, survey finds just like their parents" by The Washington Post's Craig Timberg. This practice undermines "cognitive function and mental health while increasing obesity rates" and causing household conflicts.

Joshua A. Douglas is out with a key book, Vote for US: How to Take Back Our Elections and Change the Future of Voting. Reclaiming the electoral process is crucial for our democracy and to improve the quality of life in our country.

"Why We May all Have to Give Up Pork" letter to the editor of The Washington Post by Patricia E. Perry. She cites documented infectious diseases and Trump's move to sideline federal inspectors and allow even more self-inspection by the meat packers wanting to speed up the slaughter-processing assembly lines. Ugh!

"Hogan Will Not Challenge Trump, Leaving Trump's GOP Critics with Limited Options," by The Washington Post's Robert Costa. Like Maryland governor Larry Hogan, other fearful, viable challengers like Senator Mitt Romney, former Ohio governor John Kasich, Arizona ex-Senator Jeff Flake, and former U.S. trade representative Carla Hills aren't going to challenge Trump. Trump is clearing the Republican primary field with foul mouthed intimidation. No matter these Republican politicians really believe Trump is a clear and present danger to our Republic and to the future of the Republican Party. Only the laid back former governor, William Weld, has his hat in the ring.

"The NFL Has Finally Been Consumed by the Concussion Issue. Why Hasn't the NHL?" by The New York Times' John Branch. Consumed, that is, after years of cover-ups. The Hockey bosses literally stage fights between players kept on the team just to fight for the boisterous crowds. Head injuries have taken the lives and diminished the brain functions of scores of players over their shortened lives. This is criminal and sets a bad example for youthful amateur sports where concussions are not taken seriously enough. See our Leagueoffans.org.

"Art Festival is Welcome, But Not the Huge Crowds," by The New York Times' Helene Stapinski. The 13th annual free "Figment Arts Festival" on Roosevelt Island is overwhelmed by 30,000 visitors. "Huge crowds forced the tram to shut down and the bridge to close, overwhelming the subway platform." Makes you wonder why civic conferences, open free to the public, dealing with the most precious matters of livelihood, peace, and justice beg to fill the empty seats.

"If Trump Doesn't Warrant Impeachment, Who Does?" by The Washington Post columnist Eugene Robinson. It's useful to have Robinson list many of Trump's impeachable offenses in one place. He still left out several serious acts such as blatantly, openly dismantling the enforcement of health and safety laws in violation of his constitutional oath to faithfully execute the law and conducting illegal wars without Congressional declarations and appropriations.

Related Topic(s): Arts; Attention; Content; Newspapers; Publishers, Add Tags
Add to My Group(s)
Go To Commenting
The views expressed herein are the sole responsibility of the author and do not necessarily reflect those of this website or its editors.