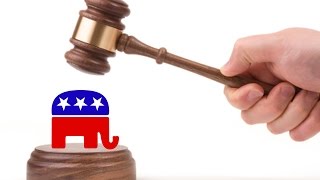 The Democrats' chances of regaining a House majority received a boost Monday when the U.S. Supreme Court refused to block a Pennsylvania Supreme Court ruling ordering its legislature to immediately revise its congressional map for 2018 elections--or else the state high court would.

U.S. Supreme Court Justice Samuel Alito declined, without comment, a request by Pennsylvania Republicans to freeze a January 22 order that threw out the House districts created by the GOP-majority legislature in 2011, following the last Census.

While the state's voters are split between the two major parties -- as seen in 2016's presidential election where Donald Trump beat Hillary Clinton by 44,000 votes -- the Republicans' extreme gerrymander gave them 13 House seats compared to five for Democrats.

The Democrats need to pick up 24 additional seats in November to regain a House majority.

The redistricting fight in Pennsylvania is a microcosm of the anything-goes tactics the GOP will employ to take and hold power. The Pennsylvania Supreme Court's order to redraw the maps set a February 9 deadline -- this Friday -- to submit new congressional maps, as well as a deadline last week to submit additional data concerns over how the new districts will be drawn.

Pennsylvania's high court is composed of elected judges, Democrats and Republicans alike. Its state senate president, Republican Joe Scarnati, said a Democratic justice who voted to overturn the GOP's 2011 maps had criticized gerrymandering while campaigning -- which Scarnati claimed should have disqualified him from the case.

What since has surfaced is that Scarnati's political action committee, Friends of Joe Scarnati, made a $25,000 contribution to the campaign of Supreme Court Justice Sallie Mundy, a Republican, who did not disclose that before hearing the case and voting to keep the gerrymandered districts. In other words, Scarnati accused a Democratic justice of being compromised for public statements about redistricting, while his own PAC had donated a five-figure sum to a Republican justice who didn't reveal that fact and then voted to uphold a GOP gerrymander. (On Monday, Mundy issued a statement acknowledging the campaign donation.)

The hypocrisy doesn't end there. On Monday, Scarnati spewed more false equivalencies to try to discredit what will likely be a court-ordered rebalancing of the state's congressional delegation -- assisting Democrats. His office issued a statement saying that his PAC's donations to Mundy were offset by donations from Democratic Gov. Tom Wolf to the Supreme Court's Democratic justices -- who he said was a party in the lawsuit, and thus, another conflict of interest.

But as Michael McDonald, a University of Florida redistricting expert who testified in the case, tweeted, that's also false. "My understanding is that @GovernorTomWolf is listed as a party to the PA redistricting case simply as a matter of who to sue, but his office has not taken an active role in support of either side in the litigation."

Stepping back from this Trump-like swirl of baseless accusations and spin, what's unclear are the next steps in revising the congressional map. So far, Pennsylvania Republicans have been fighting their state Supreme Court -- not following court orders and deadlines. The state Supreme Court wants a new map as soon as possible, so that candidates and election officials can plan for the primary election that is scheduled for May 15.

"Now, what I haven't seen any news about, is what the PA Supreme Court is going to do about the legislature's refusal to deliver court-ordered redistricting data last Wednesday," McDonald tweeted. "The legislature also claimed in their Wednesday court filing that they would not produce a new remedial redistricting plan, which means either @persily [Court consultant and Stanford University Law Professor Nathaniel Persily] is going to draw another state's congressional districts or the legislature will relent and draw a plan."

"What will @persily do?" McDonald continued. "In my experience it is very difficult to guess what map will be created. Still expect: more Democratic leaning districts. Fairness is not a criteria, so may not be equal division of state -- incumbent pairings and open seats -- incumbents with new constituents... If the legislature knew early last week that they would strike out at #SCOTUS, maybe they would have adopted a more cooperative stance with complying with the PA Supreme Court's orders. Now, if they want to produce a new map, the clock has already ticked down."

Steven Rosenfeld  covers democracy issues for AlterNet. He is a longtime print and broadcast journalist and has reported for National Public Radio, Monitor Radio, Marketplace,  TomPaine.com  and many newspapers. (more...)
Related Topic(s): Democracy; Gerrymandering; Pennsylvania Politics; Pennsylvania Supreme Court, Add Tags
Add to My Group(s)
Go To Commenting
The views expressed herein are the sole responsibility of the author and do not necessarily reflect those of this website or its editors.