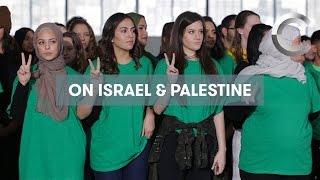 For 100 years -- counting from the 1917 Balfour Declaration -- the Zionist process of conquest has ruthlessly gone forward. It has relentlessly displaced the non-Jewish population of Palestine so as to facilitate the "ingathering of the Jewish exiles." The processes and behaviors consciously chosen to achieve this end have been consistently brutal, aggressive, and expansionist.

The consequences for the Palestinian people are well documented both by Palestinians such as Nur Masalha and Israelis such as Ilan Pappe. There are now millions of Palestinian refugees spread throughout the world. One-third of these people live in refugee camps. Another 1.6 million Palestinians live in Israel under discriminatory, segregationist circumstances. Palestinians in the occupied territories (OT) are just that -- under occupation. Gaza is often described as the world's largest open-air prison.The overall result is the ongoing destruction of a people, its history and culture.

Many Israelis don't so much deny these facts as excuse them. Take for instance the Israeli author Ari Shavit. In his book My Promised Land he confesses that the crimes of the Zionist movement (the example he uses is a 1948 massacre of Palestinians at Lydda) are not sufficient for him to reject its achievement (the founding of the Israeli state). "I will stand by the damned. Because I know that if it wasn't for them, the state of Israel would not have been born. ... They did the dirty, filthy work that enables my people, myself, my daughter and my sons to live."

Shavit makes too little of "standing by the damned." The fact is that the behavior of the damned did not end in 1948. The atrocities continue, and fully half of Israeli Jews would just as soon see the Palestinians cleansed from Israel once and for all. Shavit will see no end to the consequences of his sordid affirmation. Put another way, it is the fate of those who swear loyalty to an empowered racist political ideology to be damned for as long as that belief system guides the exercise of power. Zionists have, essentially, committed moral and ethical suicide.

Part II -- Jewish Victims While the Palestinians are certainly the major victims of Zionism -- the ones living under apartheid conditions or dispossessed and scattered around the world, the ones shot daily for acts of both violent and non-violent resistance - they are not the only victims. Jews of conscience, those who believe in international law, in standards of human, civil rights and political rights, daily have to deal with an existential nausea because horrible acts are being carried out in the name of the Jews -- they too are victims of Zionism.

Let me try to explain what has been done to this second set of victims. Zionism has victimized the Jews of conscience (and indeed all Jews) in two ways: first, it has attempted to tie them to a racist political ideology that glorifies the settler-colonialism of the 19th century and anachronistically carries it into the modern world. This is a process that has proven increasingly harmful to those aspects of international law that have traditionally helped protect Jews and other minorities. The Zionists have not just abandoned this law -- their policies are the antithesis of these humane and civilizing rules.

Second, in religious terms Zionism has empowered the reactionary and exclusionist orthodox branches of Judaism to the point of fractionalizing the religious community as a whole, and threatening the excommunication of Judaism's reform movement. Thus, Zionism represents a real threat to any modern ethical interpretation and practice of the Jewish religion -- a practice more congenial to the support of human rights.

Part III - A Proposal for a Formal Alliance These parallel processes, aggression against the Palestinians and the moral corruption of the Jews are, of course, intimately connected. The more the Palestinians suffer, the more Zionism demands Jewish complicity. Thus, if the Palestinians disappear as a people, so do Jews of conscience. They have become two sides of the same coin.

This connection really makes a formal, international alliance of Palestinians and Jews of conscience a necessity -- an alliance that builds on the very important ones that now exist in local venues. What I propose is a preliminary meeting of representatives of Palestinian organizations from Israel and the Occupied Territories, as well as the Palestinian diaspora, coming together with representatives of organizations of Jews of conscience from both Israel and the Jewish diaspora.

The Jewish groups should be those already promoting Palestinian human, civil and political rights. The object of such a meeting should be to set down united objectives leading to the transformation of Israel from a exclusionist "Jewish state" to a truly democratic state of all its people. Future meetings could work out mutual strategy and tactics for the work of this international united front.

The truth is that such a move as this is probably necessary if the horror of Zionist Israel is ever to be overcome. The Palestinians in Israel and the Occupied Territories cannot win this war on their own. Those in the diaspora are struggling mightily but can not yet challenge Zionist influence in government circles. Worldwide civil society has become engaged in promoting the Boycott, Divestment and Sanctions movement. Christians of conscience also do vital work. Yet, it is the Jews who, most importantly, must be seen to offer a democratic alternative to Zionist racism. And, they must do this publicly, shoulder to shoulder, with the Palestinians. A redeeming future for both people lies through just such an alliance.

Related Topic(s): Boycott; Corruption; Diaspora; Israel; Palestinian; Resistance; Zionism, Add Tags
Add to My Group(s)
Go To Commenting
The views expressed herein are the sole responsibility of the author and do not necessarily reflect those of this website or its editors.