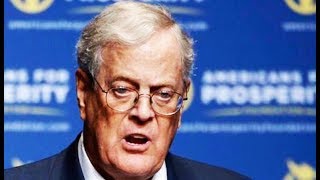 Kochfest 2017 Billionaires: Time To Get What We Paid For!
(Image by YouTube, Channel: The Young Turks)   Details   DMCA

There's a simple reason why Republicans default to the culture wars. It is because it doesn't cost their donor class any money.

If the Republicans pass legislation saying that Muslims can't run for political office, unless there's a Muslim right-wing billionaire out there it doesn't affect them.

Many industries are making obscene profits as a consequence of the extraordinary expansion of our trademark and copyright laws, largely at the behest of companies like Disney and Microsoft, so that those companies have these government-granted monopolies that last for centuries in some cases, decades certainly.

The Republicans will never talk about any of those things because those are the things that affect their donor class but they will enthusiastically kick around people of color.

The good news here is that the Republicans went all-in on Trump's racism over the last three weeks in Virginia. Ed Gillespie, everybody thought it was going to be a neck-and-neck race.

Ed Gillespie went in full racism in the last couple weeks of this election and it looks like it actually hurt his numbers, and when the Republicans figure that out then the donor class will start being concerned about race.

The billionaire class will get that they can't just rely on the votes of white people anymore.

Related Topic(s): Billionaires; Election; Republican, Add Tags
Add to My Group(s)
Go To Commenting
The views expressed herein are the sole responsibility of the author and do not necessarily reflect those of this website or its editors.