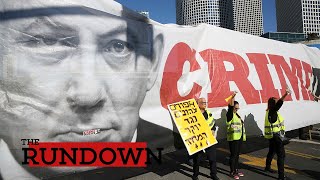 Messy Politics: Netanyahu Cases Amid Election Chaos on Left THE RUNDOWN | The popular will and the rule of law are on the verge of colliding as Prime Minister Benjamin Netanyahu is a suspect in three corruption cases.
(Image by YouTube, Channel: i24NEWS)   Details   DMCA

Israeli prime minister Benjamin Netanyahu commandeered the country's airwaves last week in what many assumed would prove a moment of profound national import. They could not have been more wrong.

The context was his decision last month to move forward the general election to April, widely seen as a desperate effort to turn the vote into a referendum on his innocence as long-standing corruption investigations close in.

The police have recommended that he be charged over three separate allegations of bribery. By calling the election, Netanyahu has forced the attorney-general, Avichai Mendelblit, onto unfamiliar and constitutionally tricky terrain.

Mendelblit, an appointee of Netanyahu's, has indicated that he will make a decision on whether to issue an indictment before the ballot, so that voters have the facts to make an informed choice.

But Netanyahu has said he won't drop out or resign, even if indicted, and there is no decisive precedent to suggest he must.

Instead, he would prefer to bully the attorney-general into delaying a decision until after voters have spoken. That was the purpose of his unexpected live national TV address.

His supporters have already set the stage, claiming that an indictment mid-campaign would influence the outcome and usurp the will of the people.

Either way, Netanyahu hopes to benefit. If an indictment is served before the vote, it will rile up his base and bolster a carefully crafted narrative that he faces a campaign of persecution from state authorities.

If Mendelblit delays, Netanyahu will aim to exploit any electoral success to face down prosecutors, accusing them of seeking to reverse his popular mandate.

Netanyahu's strategy was on full show last week when he took to the main TV channels. He used this moment of enforced national attention for nothing more serious than a self-serving gripe.

The investigators, led by a far-right police commander he personally approved, had supposedly joined a leftist plot to oust him. The proof was that they had denied him a chance to confront in person his accusers former aides turned state witness and challenge their testimony.

Claiming that he had been stripped of his legal rights, Netanyahu demanded a showdown be broadcast live effectively trailblazing a new type of reality TV show for suspects in high-profile criminal cases.

Of course, Netanyahu understands only too well that such confrontations with witnesses are decided by the police, not the accused, and used only when evidence needs to be tested.

The police believe they already have the evidence required for a conviction, and hope to test it in a court of law, not in the type of TV spectacle in which Netanyahu excels.

Netanyahu's move was intended to reinforce his claim that the "system" one that has kept him and the ultra-nationalist right in uninterrupted power for a decade is rigged against him.

Related Topic(s): Corruption; Democracy; Election; Israel; Israeli Elections; Israeli Government; Israeli Interference In Politics; Leader; People; Politicians; (more...) Politics; Prosecutor; Truth; Voting, Add Tags  (less...)
Add to My Group(s)
Go To Commenting
The views expressed herein are the sole responsibility of the author and do not necessarily reflect those of this website or its editors.