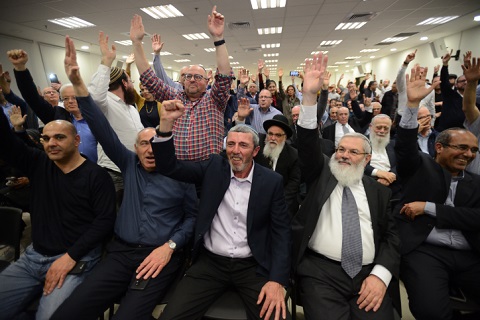 Few in Israel expect the country's third general election in a year to end with a markedly different outcome from the previous two. Barring a last-minute upset, most of those turning out on Monday assume the political stalemate will continue. There are already rumblings from politicians of an imminent fourth round of voting.

Paradoxically, much of the Israeli electorate at least the Jewish majority agrees on political fundamentals. They believe it is time to permanently seize much of the territory that was one day meant to form the basis of a Palestinian state.

They disagree less on what needs to be done than on who should do it. As before, the election is chiefly a referendum on Benjamin Netanyahu's fitness for office after more than a decade in power.

But the context of this election is different in two ways.

The first is that Mr Netanyahu is no longer fighting the campaign with mere allegations of corruption hanging over him. In two weeks, he is due to stand trial as a criminal defendant. No sitting Israeli prime minister has ever been in the dock before.

With so much at stake, Mr Netanyahu and his Likud party are playing even dirtier than usual in pursuit of every last vote for their bloc, which represents the religious and settler right.

Mr Netanyahu needs to fire up supporters who are tired of repeated elections so that they turn out in larger numbers than ever. If he can secure a parliamentary majority, he has indicated that he will use it to try to pass a French-style law conferring on him immunity while he heads the government.

The Haaretz newspaper reported on Saturday that Mr Netanyahu is even trying to dig up dirt to discredit his own attorney general the man who approved his prosecution and trial.

But most of the character assassination has focused on Mr Netanyahu's chief political rival, Benny Gantz, a former army general who heads the right-wing, largely secular Blue and White party. Mr Gantz finally lost his cool last week, angrily denouncing Mr Netanyahu for presiding over a campaign of "lies and mud".

Mr Netanyahu's goal has been to shift attention away from his impending trial to questions about Mr Gantz's conduct and competence.

The state prosecutor, one of Mr Netanyahu's recent appointees, has fast-tracked a criminal investigation into a bankrupt cyber-security company Mr Gantz once headed.

The former army general is not believed to have been personally involved in any wrongdoing. But the case has allowed Likud officials to suggest that there are now criminal "suspicions" against both party leaders, levelling the playing-field.

Related Topic(s): Israeli Elections, Add Tags
Add to My Group(s)
Go To Commenting
The views expressed herein are the sole responsibility of the author and do not necessarily reflect those of this website or its editors.