Cyber warfare superpower, launching spacecraft to the moon, a day after the election the Israeli Central Election Committee published voter turnouts of over 100% in Jewish settlements in Palestine.

(Image by Kaizler Inbar)   Details   DMCA
Keizler Inbar PR firm post, boasting the success of a secretive, "amazing logistic" operation, in collaboration with PM Netanyahu, in which cameras were illegally planted in Arab ballot stations, "preventing thousands of forgeries", and suppressing voting rates below 50%. [i] During the April 9, 2019 election, Police was called to stop the illegal videotaping.

In contrast, a the morning after election day, activists posted the ballot station outcomes from the Central Election Committee web site, showing voter turnout in Jewish settlements in Palestine, ranging between 97 and 173% " 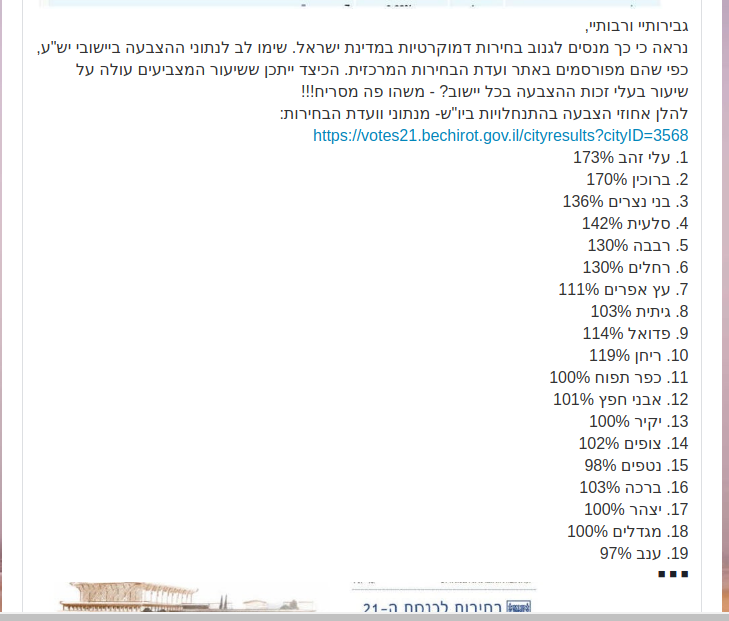 In response, later in the day, the Central Election Committee issued an explanatory note to media: data entry errors" [iii]

Such incidents are far from surprising. As soon as the 2019 election was prematurely announced by Netanyahu, concerns were raised regarding integrity of the Central Election Committee, particularly related to its IT systems. [iv]

The Central Election Committee, headed by Supreme Court justices, has a checkered credibility record. Human Rights Alert, and Israeli NGO, specializing in e-government monitoring and analysis has repeatedly documented failures in IT systems of the Central Election Committee, and lack of integrity in the Committee's Freedom of Information responses, pertaining to its IT systems. 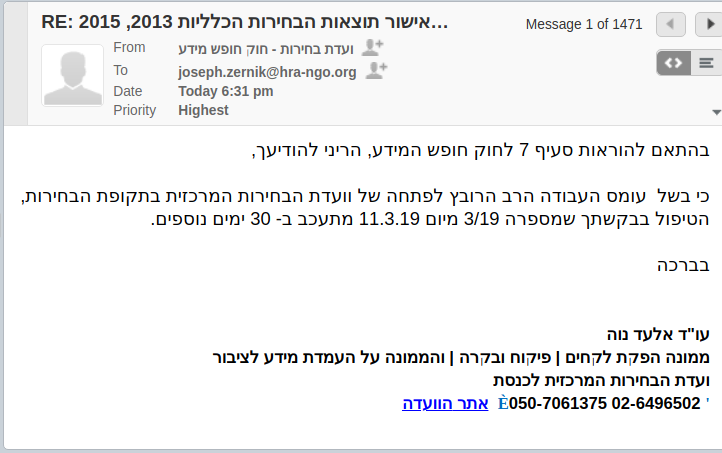 Top: March 11, 2019 FOIA request (03-2019), filed with the Central Election Committee by Human Rights Alert NGO, seeking documentation of certification of the 2013 and 2015 general election outcomes by Supreme Court Justice, who served as Committee Chairs. Bottom: April 08, 2019 (a day prior to the general election) note by the Committee, extending the lawful time for response by 30 days, due to "work overload".

His work won appreciation in Israel and abroad: * Prof Uzzi Ornan - "All power to you! I hope that you see your tremendous efforts (more...)
Related Topic(s): Election Fraud, Add Tags
Add to My Group(s)
Go To Commenting
The views expressed herein are the sole responsibility of the author and do not necessarily reflect those of this website or its editors.