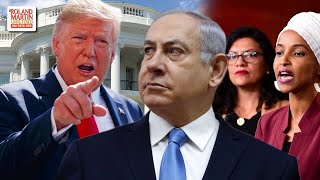 Proponents of trade and immigration controls oftentimes forget that there is another factor that comes with their socialist immigration system, that is, in addition to the death, suffering, police state, and destruction of the rights of economic liberty, liberty of contract, freedom of association, and private ownership of property. That factor is the destruction of freedom of travel, another fundamental, natural God-given right that adheres in all people everywhere and that preexists all governments.

Omar and Tlaib had plans to visit Israel. However, relying on an Israeli law that empowers the Israeli government to bar people who openly support the boycott movement, Israeli Prime Minister Benjamin Netanyahu has ordered that Omar and Tlaib not be permitted to enter the country. Given recent political differences between the two congresswomen and President Trump caused Trump to publicly encourage Netanyahu to use his power to refuse entry to Omar and Tlaib.

It is a classic example of how the power to control immigration can be abused by public officials so as to destroy the exercise of fundamental, God-given rights, such as freedom of travel, a right that enables everyone in the world to travel wherever he wants, regardless of his political, ideological, or religious views.

Of course, it's not the only time that public officials have abused the power to control immigration. President Franklin Roosevelt did the same thing in the 1930s. When German Chancellor Adolf Hitler was willing to let German Jews leave Germany long before the Holocaust, Roosevelt used America's system of immigration controls to prohibit them from coming to the United States. Citing the "quota system," he said that Germany's "quota" had already been filled. Since every other nation took the same position as Roosevelt, the German Jews had to stay in Germany, where they later were killed in the Holocaust. In fact, today's Los Angeles Times has an op-ed about this sordid part of U.S. history that is worth reading.

If the United States had had the system of open immigration on which the nation had been founded and which lasted for more than 100 years, that wouldn't have happened. German Jews could have freely come to the United States and there wouldn't have been anything Roosevelt could have done to prevent it. Roosevelt, like Netanyahu, abused his power to control immigration to destroy the fundamental, God-given gift of freedom of travel, and German Jews paid the price.

Ironically, if America had continued its founding system of open immigration, that would most likely have also meant that the state of Israel, along with its longtime mistreatment of Palestinians, would never have come into existence, given that the United States would have continued being a safe haven for Jews and everyone else around the world.

The reaction of the Washington Post to the controversy is somewhat unusual, given the following phrase that appears in a Post editorial on the controversy: "As for the principle that elected representatives of the American people should be able to travel where they like..."

Where in the world does the Post come up with that principle? I'm familiar with the principle that people have the natural, God-given right to travel wherever they want. But the Post has made a major modification of that principle by claiming that it applies to "elected representatives of the American people." That is one bizarre modification of a long-established principle of liberty! I can't help but believe that the editorial writer had some real difficulty crafting that particular phrase and then getting it approved by the rest of the Post' s editorial board.

It's not just immigration controls that public officials have used to destroy freedom of travel, they have done the same thing with their power to control trade. A good example of this phenomenon involves the U.S. government's decades-old economic embargo against Cuba, which targets the Cuban people with impoverishment and death with the aim of achieving regime-change on the island.

If an American travels to Cuba and spends money there without official permission, he is arrested, prosecuted, convicted, fined, and jailed by U.S. officials on his return.

One of the interesting and, actually, revealing aspects of the embargo is that it doesn't exactly make traveling to Cuba a U.S. felony offense. That's because U.S. officials did not want to be perceived as destroying the right of freedom of travel, just as communist and other totalitarian regimes do. So, instead of expressly prohibiting Americans from traveling to Cuba, they made it illegal to spend money there. That way, they could ostensibly say that unlike the communists, they weren't destroying the fundamental right of freedom of travel.

It was a lesson in Hypocrisy 101 because the practical effect was the same. By making it illegal for Americans to spend money in Cuba (without the official permission of U.S. officials), as a practical matter they were making it illegal to travel there. It also apparently didn't occur to U.S. officials that by controlling what Americans did with their own money, they were destroying the fundamental right of economic liberty that the communists in Cuba had destroyed.

Today, U.S. officials wield the totalitarian power to prohibit Americans from traveling to places that U.S. officials don't want them to travel whether they spend money there or not. For example, not too long ago, President Trump issued a presidential decree-law making it illegal for Americans to travel to North Korea. If any American violates Trump's decree-law, he is arrested, prosecuted, convicted, fined, and imprisoned here at home. It obviously doesn't occur to Trump that he is exercising the same totalitarian power to destroy the rights of the American people as the North Korean communist regime exercises.

Related Topic(s): Freedom; Immigration; Israeli American Relations; Israeli Interference In Politics; Israeli Intransigence, Add Tags
Add to My Group(s)
Go To Commenting
The views expressed herein are the sole responsibility of the author and do not necessarily reflect those of this website or its editors.