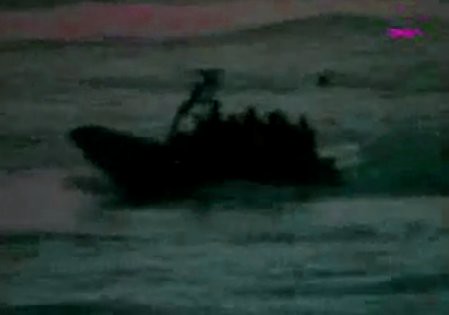 Immediately following a deadly attack by Israeli commandos on the Freedom Flotilla, a humanitarian aid convoy seeking to break Israel's blockade of Gaza, Israeli authorities put in place, according to Reporters Sans Frontieres (RSF), a ban on media preventing any information about the dead and wounded taken to hospitals in Israel from being reported by journalists. Such censorship has made it possible for Israel to promote a claim that the Free Gaza Movement behind the Freedom Flotilla has participants allied with al Qaeda.

The international organization for press freedom released this statement on the attack on the flotilla that was carrying aid, 750 pro-Palestinian activists and several journalists to the Gaza Strip:

"We deplore this assault, which left a heavy toll of dead and wounded. The journalists who were on the flotilla to cover the humanitarian operation were put in harm's way by this disproportionate reaction. We urge the Israeli authorities to release the detained journalists and allow them unrestricted access to the Gaza Strip. The international community needs accurate information about this Palestinian Territory."

Robert Booth with The Guardian, a newspaper based in the United Kingdom, wrote, "Shortly after the assault, all communications with the flotilla were blocked. Mobile phones, satellite phones and Internet access all went down, making it all but impossible to glean any account from the passengers about what happened beyond the few minutes that were captured on film. Israel's version of events became the only one available in any detail." [Booth's editorial went on to explain what The Guardian thinks has happened based on information they have been able to piece together.]

Israel's censorship of information has made it possible for authorities and officials to get out in front on this story. Electronic Intifada's Ali Abunimah appeared on Democracy Now! hosted by Amy Goodman and Juan Gonzalez and urged those reading stories of the raid to put it into context.

AMY GOODMAN: "Ali Abunimah, can you talk about the videotape? And again, we have to stress, in the brief coverage that we see in US media right now, because we do not even know the names of the dead or the injured, not to mention hundreds of people who are now in jail in Israel, we're only getting one side here. But the videotape that the Israeli government is showing of what happened on the lead ship, on the Turkish ship, Ali?

ALI ABUNIMAH: Yes. I mean, what we have to do is put all this in the context of Israel's propaganda strategy. What they've done is imposed a total news block-out--blackout. Hundreds of people are detained. They've had no access to lawyers, certainly no access to media. It was reported there was one Al Jazeera cameraman, of the six Al Jazeera staff who were kidnapped with the ships, who was released. And what he said is that all the passengers were allowed to leave the ships only with their passports, with no other personal belongings. He was personally attacked by Israeli soldiers while he was filming, and his camera smashed. In any case, no journalists were allowed to leave the ships with any film or any recordings whatsoever. We don't know the names of the dead. The families of all those passengers are anxiously awaiting news of their loved ones. Why is this? So that the Israeli narrative can get a long head start. This is all about the Israeli propaganda strategy to give the Israeli propagandists, like Mark Regev, a free run. They've had more than twenty-four hours. And, Amy, it's working in the mainstream media, because they're only reporting, you know, the atrocious reporting on National Public Radio and on the BBC, which is taking mostly the Israeli version. [emphasis added]

Reinforcing Abunimah's comments is a list from RSF recently published which indicates, of the foreign journalists on board the flotilla, at least fourteen are still unable to be reached.

The treatment of foreign press is another reminder that Israel does not adhere to core principles of press freedom. Israel frequently bans foreign journalists from entering Gaza. This is because Danny Seaman, head of Israel's government press office, believes, "When you have hundreds of journalists coming in, most haven't the faintest idea about the war or the situation...Take the UN school [where 42 people were killed by an Israeli shell] for example. There's a lot of questions as to what actually happened. If the foreign media had been there it would have had much more of an impact on the conflict than it has at the moment. For the first time, when Israel raised questions, journalists had to address these issues and not get caught in feeding frenzy of reporting the story."

Kevin Gosztola is managing editor of Shadowproof Press. He also produces and co-hosts the weekly podcast, "Unauthorized Disclosure." He was an editor for OpEdNews.com
Related Topic(s): Censorship; Free Gaza Movement; Freedom; Freedom Flotilla; Freedom Flotilla Attack; Freedom Of The Press; Gaza; Israeli Attack On Convoy; Israeli Blockade Of Gaza; Israeli_Propaganda; (more...) Journalists-Journalism; Media; Media Network Al Jazeera; Palestinian; Propaganda; Reporters, Add Tags  (less...)
Add to My Group(s)
Go To Commenting
The views expressed herein are the sole responsibility of the author and do not necessarily reflect those of this website or its editors.