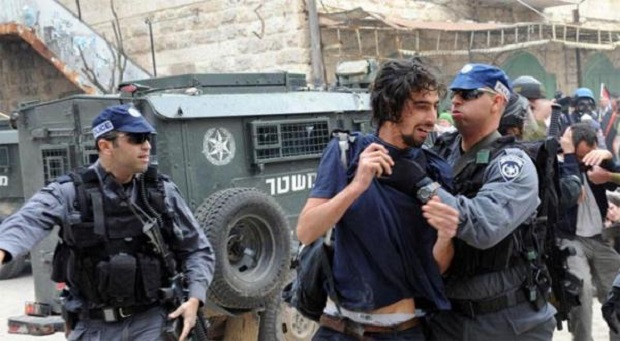 Palestinian citizens of Israel take to streets to accuse police and politicians of exploiting crime wave in their communities
(Image by eng-archive.aawsat.com)   Details   DMCA

Palestinian citizens of Israel escalated their protests against the police and government on Thursday by bringing sections of the country's busiest highway to a crawl as they drove in a slow convoy towards Jerusalem for a major demonstration.

It was the latest in a series of high-stakes confrontations by Israel's large Palestinian minority with the authorities to express their anger at police inaction over a tide of violence that has swept their communities. More than 70 lives have been claimed so far this year.

Over the weekend, Palestinians in Israel took over numerous road junctions to block traffic, causing long tailbacks, as they sought to bring their campaign to the attention of a seemingly indifferent Israeli Jewish public.

Israel's 1.8 million Palestinian citizens descended from those who avoided expulsion during Israel's creation in 1948 comprise a fifth of the country's population. However, this year, they account for as much as 80 percent of the country's murders up from 5 percent 20 years ago.

According to figures from the Aman Centre, which campaigns against violence in Palestinian society in Israel, September was the deadliest month ever: 13 Palestinian citizens were killed in criminal activity.

An investigation by the Haaretz newspaper this week found that the police had solved less than a third of murders in Palestinian communities in Israel this year half its clear-up rate in Jewish communities.

Leaders of the Palestinian minority say their towns and villages have been largely abandoned by the police, creating a vacuum filled by criminals. Many of the killings are the result of vendettas, criminal gangs' turf wars and domestic violence. In several incidents bystanders have been shot too, including children. Tens of thousands attended the largest protest in Majd al-Krum, a Palestinian town in the central Galilee, where three men died in a shoot-out last week.

But there are also widespread suspicions that the police are actively complicit in the bloodshed. Historically, the police have recruited Palestinian crime families as informers, as a way to gather inside information on the minority.

The impression, say community leaders, is that the police are more interested in maintaining relations with these criminals than tackling the crime wave.

The Higher Follow-Up Committee, effectively the collective political leadership of the Palestinian minority, issued a statement over the weekend noting "a conspiracy between the police and the criminal organisations. The authorities know very well where the weapons are coming from into the Arab towns".

Police estimates suggest that there may be as many as half a million weapons in Palestinian communities in Israel. Most are believed to have originated from Israeli army bases.

Ahmed Tibi, a senior Palestinian member of the Israeli parliament, observed: "It is delusional to think that police intelligence is unaware of who is bringing them in and where from. If it were weapons smuggled in to be used by terrorists, the weapons would've been confiscated, and the responsible individuals put in jail at a moment's notice."

The committee's statement complained that Israeli officials were exploiting the tide of violence as a way to "attack the social fabric of the Arab public".

Aida Touma-Suleiman, a member of the Israeli parliament for the Joint List faction, which comprises four Palestinian parties, said police had the tools to prevent the violence but lacked the will.

Related Topic(s): Israel; Israel And Palestine; Israel Spying; Israeli Attack On Convoy; Israeli Protests; Israeli Settlements; Israeli-palestinian; Israeli_Propaganda; Palestine_and_Israel; Police; (more...) Police Brutality; Police Coverup; Security; The Blockade Of Gaza By Israel; Violence, Add Tags  (less...)
Add to My Group(s)
Go To Commenting
The views expressed herein are the sole responsibility of the author and do not necessarily reflect those of this website or its editors.