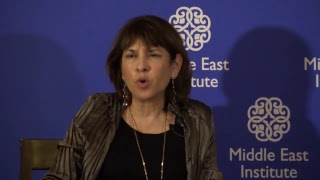 Talia Sasson is the president of the liberal Zionist group the New Israel Fund (and a lawyer, former longtime government official, and candidate for the Knesset in the Meretz Party). On a podcast for the New Israel Fund four days ago she decried the idea that Trump's recognition of Jerusalem as the Israeli capital is a blow to the peace process.

"We must continue the peace process, because the two-state solution is the only imaginable political resolution of the conflict, whenever it comes," she said; and "Israelis (i.e., Israeli Jews) will never accept a single state with Palestinians in the West Bank and Gaza having the right to vote for the parliament."

"In my opinion the two state solution is the only solution that there is. So, with more difficulty or less, usually more, and more farther in the future, or whenever it would happen, this is the only solution in my understanding that can be there... as a separation between the two peoples and different systems of laws.

"Because the other way round is one state, and one state --maybe there are many people who believe in it in Israel, but I really doubt it, and I believe that it won't last for the long run in the future. And therefore I believe that if Israel will continue by this situation, the end will be -- in that way, or that way -- one state, with Palestinians in the West Bank, maybe in the Gaza strip would have the right to vote in the Knesset. Then Israel would change its character and one day won't be ever more the home nation of the Jewish people. In my opinion Israelis will never accept that. And therefore I believe it's a matter of price, the two state solution would be. The question is, on what price? As long as the time is running out, the price is higher and higher."

As for people who say Jerusalem recognition is the last blow to peace, Sasson said they are wrong. There must be continuing dialogue, even if it doesn't lead to a deal:

"I don't think so, because negotiations for peace is an interest of both sides. They both need it, even if they don't understand that. Therefore I believe that when people would understand, maybe in Israel that peace is crucial for them, then there would be a dialogue for peace... I don't know if we could end it with a peace agreement, but a dialogue would start."

She also said that Trump's decision was a mistake because it fostered Palestinian "terror."

"I don't believe this decision has any changes on the ground, except some ramifications that I would see negatively, that it encouraged terror. I think that we could see already, violence and terror by Palestinians, and of course it became, 'They are doing this, and Israelis are doing that,' and this way and that way, and we lose more and more lives, without getting anywhere. We're not changing the situation by that."

And she said that the left can't really criticize Trump's decision to recognize Jerusalem as the capital:

"In the left of Israel there is embarrassment. You can't say Well I don't accept American recognition of Jerusalem as the capital of Israel. We thought Jerusalem is our capital anyhow, with recognition or without. So if America recognizes that Jerusalem is the capital of Israel, that's fine with us of course. But I think that this is not the right moment. And when you make the right decision in the wrong moment, it turns the whole decision to be wrong."

Sasson's remarks are a reminder of the fact that even the left in Israel deploys a rhetoric of Jerusalem-is-the-capital of the Jewish state, and Palestinian resistance to occupation is "terror." And left-wing Zionists are opposed to one state because they themselves despair over the end of a Jewish state, or argue that Jewish Israelis will never accept that outcome. Ali Abunimah has said that Jewish Israelis can change their minds on this question the same way that intransigent South African whites changed theirs.

For my own part, I'd say that I work in my community, and it's important to me to see that American Jews abandon the idea of a Jewish state, and support the principles that govern our existence here, and that we have insisted on through many a struggle -- separation of church and state; one person, one vote.

Philip Weiss is a longtime writer and journalist in New York. He co-edits a website on Israel/Palestine, Mondoweiss.net, which he founded in order to foster the movement for greater fairness and justice for Palestinians in American foreign policy. He is currently working on a novel about the US in Australia during WW2.
Related Topic(s): Israeli-palestinian; Jerusalem; Jewish State; Palestinian State; Zionists, Add Tags
Add to My Group(s)
Go To Commenting
The views expressed herein are the sole responsibility of the author and do not necessarily reflect those of this website or its editors.