Click Here to Remove All Ads
Source: The Guardian
No universally applied principle justifies the Israeli attack on Damascus. Only self-flattering tribalism does that 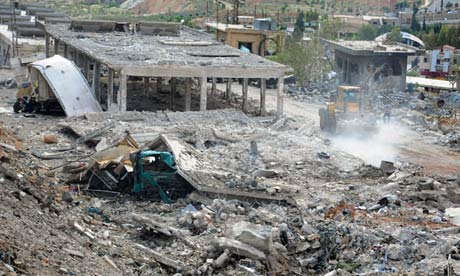 (Image by Unknown Owner)   Details   DMCA
A handout picture released by the Syrian Arab News Agency purports to show damage caused by an Israeli strike on 5 May. Photograph: AFP/Getty Images

On Sunday, Israel dropped massive bombs near Damascus, ones which the New York Times, quoting residents, originally reported (then evidently deleted) resulted in explosions "more massive than anything the residents of the city ... have witnessed during more than two years of war." The Jerusalem Post this morning quoted "a senior Syrian military source" as claiming that "Israel used depleted uranium shells," though that is not confirmed. The NYT cited a "high-ranking Syrian military official" who said the bombs "struck several critical military facilities in some of the country's most tightly secured and strategic areas" and killed "dozens of elite troops stationed near the presidential palace," while the Syrian Observatory for Human Rights said that "at least 42 soldiers were killed in the strikes, and another 100 who would usually be at the targeted sites remain unaccounted for."

Israeli defenders claim that its air attack targeted weapons provided by Iran that would have ended up in the hands of Hezbollah. Obama officials quickly told media outlets that "the administration is fully supportive of Israel's airstrikes." Indeed, Democratic Sen. Pat Leahy noted: "Keep in mind the Israelis are using weapons supplied by us." There is, needless to say, virtually no condemnation of the Israeli assault in US media or political circles. At this point, the only question is how many minutes will elapse before Congress reflexively adopts a near-unanimous or unanimous resolution effusively praising Israel for the attack and unqualifiedly endorsing all past and future attacks as well.

Because people who cheer for military action by their side like to pretend that they're something more than primitive "might-makes-right" tribalists, the claim is being hauled out that Israel's actions are justified by the "principle" that it has the right to defend itself from foreign weapons in the hands of hostile forces. But is that really a "principle" that anyone would apply consistently, as opposed to a typically concocted ad hoc claim to justify whatever the US and Israel do? Let's apply this "principle" to other cases, as several commentators on Twitter have done over the last 24 hours, beginning with this...

Or, for that matter, if Syria this week attacks a US military base on US soil and incidentally kills some American civilians (as Nidal Hasan did), and then cites as justification the fact that the US has been aiding Syrian rebels, would any establishment US journalist or political official argue that this was remotely justified? Or what if Syria bombed Qatar or Saudi Arabia on the same ground: would any US national figure defend the bombing as well within Syria's rights given those nations' arming of its rebels?

Few things are more ludicrous than the attempt by advocates of US and Israeli militarism to pretend that they're applying anything remotely resembling "principles." Their only cognizable "principle" is rank tribalism: My Side is superior, and therefore we are entitled to do things that Our Enemies are not. In more honest moments, they admit this. As soon as Hasan tweeted his question, he was instantly attacked by a writer for the Times of Israel and the Atlantic, dutifully re-tweeted by Jeffrey Goldberg, on this ground:

Copyrighted Image? DMCA
Liam Hoare   @lahoare
Israel's strike on Syria has been a revealing moment. Some, for example, seem to view Israel as equivalent to Iran https:// twitter.com/mehdirhasan/st atus/330977616691609600"

One could say quite reasonably that this is the pure expression of the crux of US political discourse on such matters: they must abide by rules from which we're immune, because we're superior. So much of the pseudo-high-minded theorizing emanating from DC think thanks and US media outlets boils down to this adolescent, self-praising, tribalistic license: we have the right to do X, but they do not. Indeed, the entire debate over whether there should be a war with Iran over its nuclear enrichment activities, as Israel sits on a massive pile of nuclear weapons while refusing UN demands to permit any international inspection of it, is also a perfect expression of this mentality.

The ultimate irony is that those who advocate for the universal application of principles to all nations are usually tarred with the trite accusatory slogan of "moral relativism." But the real moral relativists are those who believe that the morality of an act is determined not by its content but by the identity of those who commit them: namely, whether it's themselves or someone else doing it. As Rudy Giuliani put it when asked if waterboarding is torture: "It depends on who does it." Today's version of that is: Israel and the US (and its dictatorial allies in Riyadh and Doha) have the absolute right to bomb other countries or arm rebels in those countries if they perceive doing so is necessary to stop a threat but Iran and Syria (and other countries disobedient to US dictates) do not. This whole debate would be much more tolerable if it were at least honestly acknowledged that what is driving the discussion are tribalistic notions of entitlement and nothing more noble.

Former New York Times Executive Editor Bill Keller, who was one of the loudest and most influential advocates of the attack on Iraq, today demands that the US "get[] over Iraq" and militarily attack Syria. He does so even as he says that his public drum-beating for the Iraq war "turned out to be a humbling error of judgment, and it left [him] gun-shy," but then argues that the attack on Syria is justified, in part, by the fact that Assad has "apparently" used "chemical weapons" on his own people. The only problem: a UN investigator said yesterday that the widely reported use of sarin gas came from Syrian rebels, not government forces. All of these claims deserve great skepticism, which is precisely why starting wars based on them is so foolish, and why Keller has obviously learned nothing despite his claims to the contrary.

For a nuanced and interesting analysis of the civil war in Syria, see this 2012 Al Jazeera column by the Syrian-Canadian Maher Arar, who was abducted at JFK Airport in 2002 and then imprisoned and tortured in Syria at the behest of the US, even though he was (as everyone now acknowledges) guilty of nothing. Although many important events have developed since that column, the context he provides on the Assad regime, what started the rebellion, and the relationship between the US and Syria are valuable.

Finally, claims of US and western superiority and entitlement are always amazing to behold given the behavior by those countries: see today's Guardian article on how the British systematically abused, tortured and killed Kenyan rebels fighting against colonial rule in the 1950s, then spent decades hiding the evidence of it and lying about it, all in an effort to avoid compensating the victims and having the world know about the atrocities they committed.

The parallels between that and today's War on Terror are obvious and glaring. Whatever descriptive phrases might apply to the US, Britain and its allies, "so objectively superior so as to warrant exemption from or special standing under international law" is most certainly not among them.

Related Topic(s): Bombing; International; Israel; Moral Values; Syria; Syria Revolution; Syrian Situation, Add Tags
Add to My Group(s)
Go To Commenting
The views expressed herein are the sole responsibility of the author and do not necessarily reflect those of this website or its editors.