By destroying the Bedouin village and slicing the West Bank in two, Netanyahu lurches closer to his vision of a Greater Israel 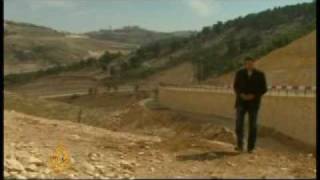 Israel finally built an access road to the West Bank village of Khan Al Ahmar last week, after half a century of delays. But the only vehicles allowed along it are the bulldozers scheduled to sweep away its 200 inhabitants' homes.

If one community has come to symbolize the demise of the two-state solution, it is Khan Al Ahmar.

It was for that reason that a posse of European diplomats left their air-conditioned offices late last week to trudge through the hot, dusty hills outside Jerusalem and witness for themselves the preparations for the village's destruction. That included the Israeli police viciously beating residents and supporters as they tried to block the advance of heavy machinery.

Britain, France, Germany, Italy and Spain have submitted a formal protest. Their denunciations echoed those of more than 70 Democratic lawmakers in Washington in May -- a rare example of US politicians showing solidarity with Palestinians.

It would be gratifying to believe that Western governments care about the inhabitants of Khan Al Ahmar -- or the thousands of other Palestinians who are being incrementally cleansed by Israel from nearby lands but whose plight has drawn far less attention.

After all, the razing of Khan Al Ahmar and the forcible transfer of its population are war crimes.

But in truth Western politicians are more concerned about propping up the illusion of a peace process that expired many years ago, than the long-running abuse of Palestinians under Israeli occupation.

Western capitals understand what is at stake. Israel wants Khan Al Ahmar gone so that Jewish settlements can be built in its place, on land it has designated as "E1."

That would put the final piece in place for Israel to build a substantial bloc of new settler homes to sever the West Bank in two. Those same settlements would also seal off West Bank Palestinians from East Jerusalem, the expected capital of a future Palestinian state, making a mockery of any peace agreement.

The erasure of Khan Al Ahmar has not arrived out of nowhere. Israel has trampled on international law for decades, conducting a form of creeping annexation that has provoked little more than uncomfortable shifting in chairs from Western politicians.

Khan Al Ahmar's Bedouin inhabitants, from the Jahalin tribe, have been ethnically cleansed twice before by Israel, but these war crimes went unnoticed.

Related Topic(s): Israel; Israel Firsters; Israeli Pressure On US; Jerusalem; Two-state Solution, Add Tags
Add to My Group(s)
Go To Commenting
The views expressed herein are the sole responsibility of the author and do not necessarily reflect those of this website or its editors.