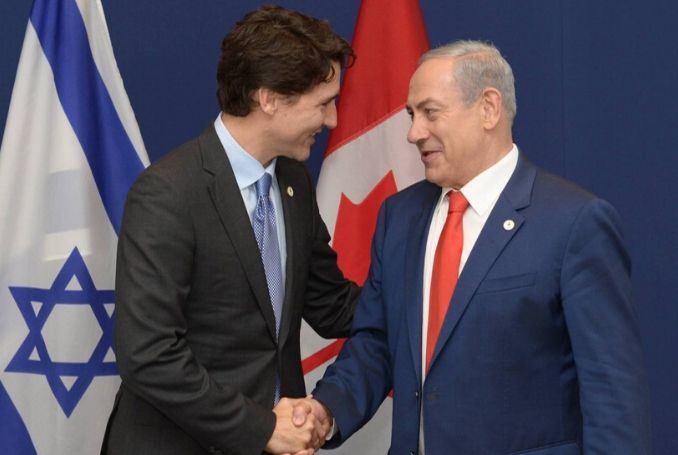 Just when you think Canadian government hypocrisy could hit no greater heights, the Liberals launch a double standards rocket to the stars.

The Trudeau government recently pressed the International Criminal Court to stop investigating Israeli war crimes. Ottawa sent a letter to the ICC saying it didn't believe the court had jurisdiction over Palestine. "Canada's longstanding position is that it does not recognize a Palestinian state and therefore does not recognize the accession of such a state to international treaties, including the Rome Statute. In the absence of a Palestinian state, it is Canada's view that the Court does not have jurisdiction in this matter," a Global Affairs official told the Jerusalem Post. But, it doesn't matter if Canada recognizes Palestine. The vast majority of UN member states recognized Palestine and it joined the ICC in 2015.

In response to Ottawa's letter to the ICC, PLO Secretary-General Saeb Erekat tweeted that Canada supported "Israel's campaign for impunity." Erekat added, "it is not about jurisdiction: It's about war crimes. This is an encouragement to continue the war crimes."

Canada's letter to the ICC implies it could sever funding if the ICC pursued an investigation of Israeli crimes. Reportedly, it reminds the court that Canada's "financial contribution to the ICC will be $10.6 million this year."

Ottawa's letter was a response to ICC chief prosecutor Fatou Bensouda's statement in December that "I am satisfied that war crimes have been or are being committed in the West Bank, including East Jerusalem and the Gaza Strip." At the time Bensouda called for a full-fledged investigation into Israeli war crimes, which could lead to arrest warrants being issued for Israeli officials.

Since then Tel Aviv has unleashed a vicious campaign against the ICC. Prime Minister Benjamin Netanyahu labeled the court's investigation "pure anti-Semitism". Israel has pushed other countries to join their attacks. Netanyahu sent a letter to Justin Trudeau calling on Canada to condemn any ICC investigation of Israeli war crimes.

Trudeau's willingness to bow to Israeli pressure on the issue is remarkable. Not only does it claim to support the ICC, the institution is closely linked to how it markets its foreign policy.

In his recent mandate letter to the foreign minister Trudeau told Francois-Philippe Champagne to "reinforce international institutions like the International Criminal Court." In March Global Affairs noted, "we are proud to support the International Criminal Court and the important work that it does." The press release boasted that Canada helped "bring the ICC into existence" and was "the first country in the world to adopt comprehensive legislation implementing the Rome Statute" that created the ICC. The statement adds that "Canada firmly supports the rules-based international order and the multilateral institutions that underpin it.""

When Trudeau addressed the UN General Assembly in September 2018, the ICC was central to his talk. The government announced Canada was taking Venezuela to the ICC and the prime minister described the court as a "useful and important way of promoting an international rules-based order."

By threatening the ICC on behalf of Israel the Trudeau government is not simply enabling Palestinian dispossession. The Liberals are also making a mockery of their foreign policy rhetoric.

Related Topic(s): Canada; International Law; Israel; Israel And Palestine; Israel Lobby, Add Tags
Add to My Group(s)
Go To Commenting
The views expressed herein are the sole responsibility of the author and do not necessarily reflect those of this website or its editors.