Yesterday's judgment, affirming the controversial Jewish nation-state law, is likely to be remembered as the Israeli Dred Scott. The Israeli justices are experts at writing hundreds of pages of "constitutional" sophistry in a nation with no constitution, out of touch with the facts on the ground. Law Prof. Manny Mautner, for many years an advocate for the courts, has recently described another such Israeli Supreme Court judgment, pertaining to Jewish settlements in the occupied Palestinian territorie , "surrealistic"...

Tel-Aviv, July 09 - an expanded panel of 11 justices of the Israeli Supreme Court rendered yesterday its judgment, denying a petition, which challenged the Basic Law: Israel - The Nation State Of The Jewish People, and affirming that the law was "constitutional". [i] The petitioners asked the Supreme Court to void the Jewish nation-state law , claiming that it was "unconstitutional", establishing discrimination against Arabs in particular and non-Jews in general .

Jewish law professor Yaniv Roznai: "... The Nation-State is not unconstitutional. It is another chapter in the Israeli constitution anchoring the Jewish character without undermining the democratic and other basic values." [sic-jz] Click Here 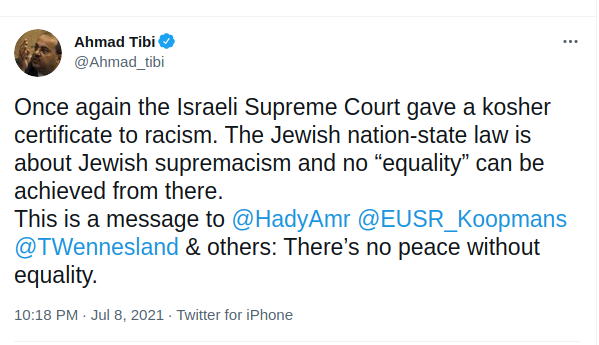 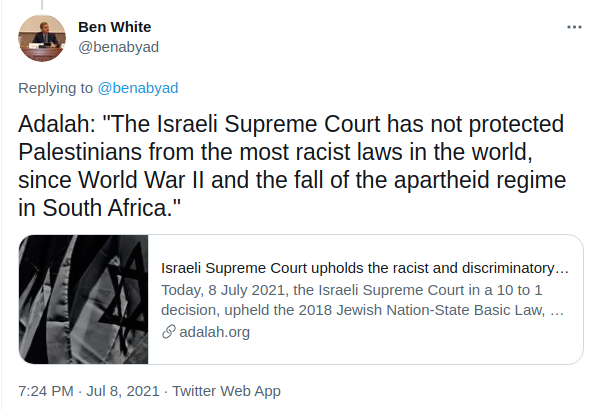 Middle-east correspondent Ben White cites Palestinian legal justice center Adalah: "The Israeli Supreme Court has not protected Palestinians from the most racist laws in the world, since World War II and the fall of the apartheid regime in South Africa." Click Here

The discussion of constitutionality is in itself an act of sophistry. The May 1948 Israeli Declaration of Independence promised a "Constitution which shall be adopted by the Elected Constituent Assembly not later than the 1st October 1948", and " will ensure complete equality of social and political rights to all its inhabitants, irrespective of religion, race or sex". [ii] Almost four score years later, reality is quite different... No constitution has ever been adopted. The Israeli Knesset has enacted along the years a series of 'Basic Law", typically passed with regular majority, but declared by then Justice Aharon Barak as equivalent to a constitution. US Judge Richard Posner reviewed the absurdity of it all. [iii] For example, the Basic Law Human Dignity and Liberty , cornerstone of the Israeli "Constitution", was enacted by a vote of 32:21, in a chamber of 120...

Yesterday's judgment, written by Supreme Court Presiding Justice Esther Hayut, was signed by all 10 Jewish justices (including West Bank settler, Justice Noam Solberg), while the sole Arab (Arabs are >20% of the population within the 1967 border), Justice George Karra, dissented.

The 205-page judgment mostly avoids any discussion of the facts on the ground, while engaging in elaborate sophistry of "constitutional" nature, finally determining that from a constitutional perspective the Jewish nation-state law was fully consistent with the fundamental character of the State of Israel and its legal system as a "Jewish-democratic" nation.

Renowned Law Prof Mordechai Kremnitzer summed the judgment: "The majority opinion ignored the reality of discrimination. The Arab Justice spoke the truth, and was left alone ... The intent [of the Jewish nation-state law] was to weaken the value of equality, when it is in conflict with the Jewish nature of the State, to harm the dignity and social standing of the non-Jewish citizens - particularly members of the Arab minority. To wit - the insistence on avoiding any reference to "democracy" or "equality", on avoiding any reference to non-Jews as integral part of the State, the mandate of promoting Jewish settlements, the demotion of the Arabic language... Judgments must speak the truth, they must not appear as State propaganda documents, which seek to present a photoshopped version of reality, or ignore it when it is problematic " ... Still, Kremnitzer gives the justices some credit: "The Supreme Court poured some cold water on the attempt to exclude the Arabs from the State using the Jewish nation-state law, and determined that the Knesset is not permitted to negate the democratic nature of the State of Israel. And yet, the judgment is grave disappointment, since it permits infringement upon equality in the name of the Jewish nature of the State". [iv]

Veteran Law Prof Menachem Mautner has been for decades an advocate of the courts. However, Mautner recently described another such Israeli Supreme Court long winded judgment, pertaining to illegal Jewish settlements in the occupied Palestinian territories, in which Presiding Justice Esther Hayut similarly engaged in "constitutional" sophistry out of touch with reality -- "surrealistic"... [v]

The Jewish nation-state law was controversial in its entirety, but three articles were at the center of contention:

His work won appreciation in Israel and abroad: * Prof Uzzi Ornan - "All power to you! I hope that you see your tremendous efforts (more...)
Related Topic(s): Israeli Apartheid, Add Tags
Add to My Group(s)
Go To Commenting
The views expressed herein are the sole responsibility of the author and do not necessarily reflect those of this website or its editors.