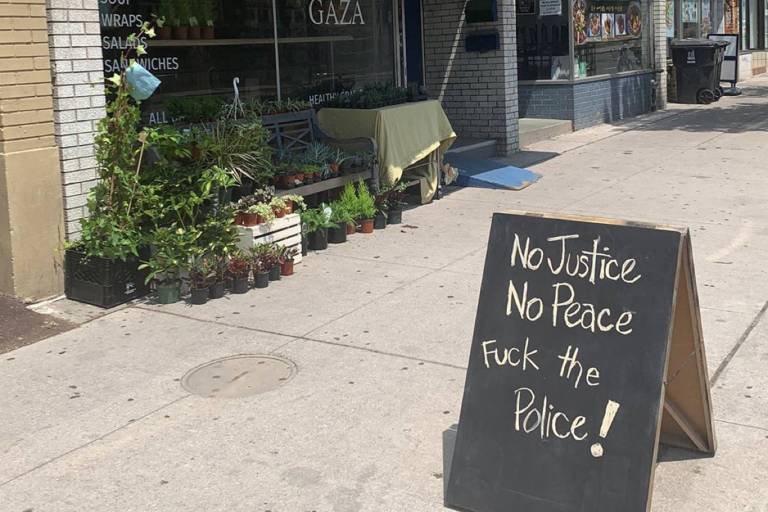 The Israel lobby has waged a remarkably successful campaign to bankrupt a small left-wing Toronto restaurant. Despite claiming to fight bigotry, it is the Israeli nationalists who have committed the surest racism and arguably taken the most anti-Jewish positions.

In response to pressure from the Centre for Israel and Jewish Affairs (CIJA), B'nai B'rith, Jewish Defence League (JDL), etc. delivery services Uber, Ritual, Door Dash and others have dropped Foodbendors in recent days. A number of institutional customers also announced they would no longer buy from the restaurant. Foodbendors' highly active Instagram account was taken down. Its money processor also held back some payments for orders and a Gofundme campaign that quickly raised $2700 to defend the restaurant was deactivated. An investigation of their business license has begun, an individual launched a $750,000 defamation suit against the owner and she is also being dragged before the Human Rights Tribunal of Ontario.

This devastating assault is being waged against a restaurant that has strongly advocated for Black Lives Matter and Indigenous rights as well as against patriarchy and Canadian imperialism. Its long Canada Day statement noted, "Canada backs every coup of elected socialist leaders led by Washington and continues to sell weapons to Saudi Arabia where they will be used to perpetuate war and famine in Yemen."

In the fall the unabashedly left-wing restaurant painted "I love Gaza" in its window on the busy Bloor street. This prompted a backlash from the anti-Palestinian crowd and put Foodbenders on the radar of those looking to squash any sign of solidarity with the long-beleaguered Palestinians. Amidst recent Black Lives Matter protests, the restaurant had a dust-up with pro-police forces when they put up a sign in front of their shop saying, "No Justice, No Peace, F*ck the Police!" Then they faced criticism for a "Happy KKKanada day" sign on July 1. Preferring targets that are already offside with elements of the establishment (think Jeremy Corbyn), the Israel lobby groups saw a chance to deliver a blow when owner Kimberly Hawkins posted to Instagram, "Open Now - 8 PM for non-racist shoppers #Bloordale #Bloorstreet, #Toronto, #Open, #ftp [f*ck the police] #FreePalestine and #ZionistsNotWelcome." The anti-Palestinian lobby claimed the #ZionistsNotWelcome hashtag discriminated against Jews.

To her credit Hawkins didn't back down. She clarified that Jews were indeed welcome and that she does not believe "criticism of the Zionist political ideology, Israel or the Greater Israel Project, or pointing out its racist supremacist foundations amounts to criticism of the Jewish people or even Israeli citizens."

Whether one believes Hawkins' restaurant has been unfairly attacked or Toronto Jewry stigmatized by the Foodbendors owner, the primary victims of any suppression of discussion of Zionism or "free Palestine" are those locked in the Gaza prison or in the occupied West Bank. In the Toronto conflict the clearest act of hate was carried out by JDL thugs scrubbing a Palestinian Lives Matter marking from the sidewalk and, similar to what Jewish supremacist settlers do to Palestinian homes in the occupied West Bank, a woman painting the symbol on the Israeli flag onto Foodbenders window.

The Israel lobby groups have also engaged in essentialist language that if taken to its logical conclusion basically blames all Jews for a European colonial movement that dispossessed Palestinians.

Critics of the restaurant have said that Hawkins uses the term "Zionism" or "Zionists" as a euphemism for "Jew" or "Jewish", which she flatly denies. Writing in the Toronto Star, self-professed progressive Emma Teitel responds to those who say using the word Zionist with a disparaging adjective "isn't anti-Semitic, because Zionism doesn't equal Judaism. But this position is a semantic fallacy. Zionism in modern Jewish terms is synonymous with a belief that the state of Israel has a right to exist. By this definition a great many Jews today are Zionists. When an activist group or a shop owner or whoever attaches anti-Semitic tropes to an adjective, Zionist, that millions of Jews wear, they're engaging in anti-Semitism plain and simple."

While some genuinely anti-Semitic people do what Teitel claims, there has to be a way to distinguish between those who support the idea of a religious/ethnic state, which is at the core of the Zionist philosophy, and those who support secular states. Many people, Jews included, believe that a state shouldn't favour one religion or ethnic group over another. Those who demand a secular state in Canada but support a Jewish state in Israel are inconsistent at best and racist at worst (against Palestinians who live under that state's control).

In their statements about Foodbendors, CIJA, B'nai B'rith and International Legal Forum directly conflate Jewish and Zionist. CIJA notes, "a recent study of Jewish Canadians confirms that the overwhelming majority of Jewish Canadians are Zionists, and the term can be used to describe our community."

Generally presented as a response to late 1800s European anti-Semitism, the Theodore Herzl-led Zionist movement was also spurred by the Christian, nationalist and imperialist ideologies sweeping Europe at the time. After two millennia in which Jewish restoration was viewed as a spiritual event to be brought about through divine intervention, Zionism finally took root among some Jews after two centuries of active Protestant Zionism. "Christian proto-Zionists [existed] in England 300 years before modern Jewish Zionism emerged," notes Evangelics and Israel: The Story of American Christian Zionism. Until the mid-1800s Zionism was an almost entirely non-Jewish movement that reflected the more literal readings of the Bible that flowed out of the Protestant Reformation.

Another factor driving Jewish Zionism was the nationalism sweeping Europe in the late 1800s. Germany, Italy and a number of eastern European states were all established during this period.

Alongside nationalist and biblical literalist influences, Zionism took root at the height of European imperialism. In the lead-up to World War I the European "scramble" carved up Africa and then the Middle East. (Europeans controlled about 10 percent of Africa in 1870 but by 1914 only Ethiopia was independent of European control. Liberia was effectively a US colony.)

Similar to Europe, Zionism's roots in Canada are Christian, not Jewish. Early Canadian support for Zionism was based on more literal readings of the Bible and tied to this country's status as a dominion of the British Empire, which in the latter half of the nineteenth century began to see Zionism as a potential vehicle to strengthen its geostrategic position in the region. At the time of Confederation, Canada's preeminent Christian Zionist was Henry Wentworth Monk. Monk called for the British Empire to establish a "dominion of Israel" similar to the dominion of Canada. In the 1978 book Canada and Palestine, Zachariah Kay notes, "Monk believed that Palestine was the logical center of the British Empire, and could help form a confederation of the English-speaking world."

By CIJA, B'nai B'rith, JDL, etc" logic, Jewry in its entirety are responsible for this colonial movement and its dispossession of Palestinians. In fact, if one makes that claim they can rightly be accused of anti-Semitism because individual Jews and Canada's Jewish community are clearly not responsible for what the Zionist movement or Israel does. Of course, individual Jews and Jewish organizations can be complicit in Israeli crimes if they support that country, but that is because of their actions, not who they are.

The Israel lobby's racist and essentialist ideas need to be contested and their effort to bankrupt a progressive Toronto restaurant resisted.

Related Topic(s): Israel; Israel Idf; Israel Lobby, Add Tags
Add to My Group(s)
Go To Commenting
The views expressed herein are the sole responsibility of the author and do not necessarily reflect those of this website or its editors.