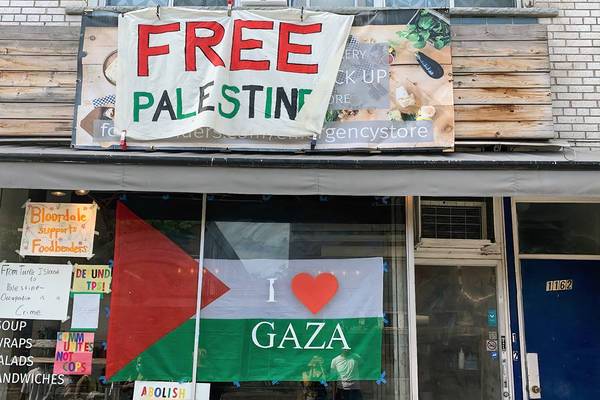 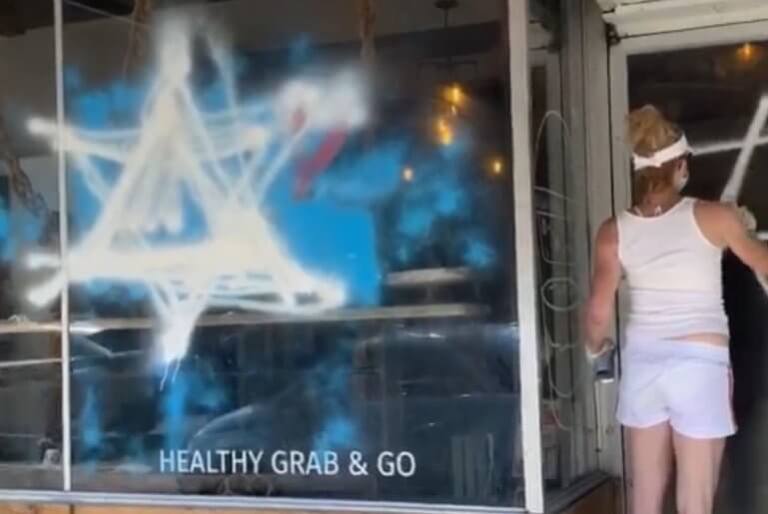 The pro-Israel community is engaged in a remarkable effort to bankrupt a small progressive Toronto restaurant. In their attack on Foodbenders, the Centre for Israel and Jewish Affairs and B'nai B'rith have once again allied with the violent, far-right, Jewish Defence League (JDL).

Over the past week the Centre for Israel and Jewish Affairs has tweeted no less than 25 times about a restaurant known for supporting indigenous rights, Black Lives Matter and other social justice causes. CIJA and associates have targetedFoodbenders' delivery services, institutional customers, website host and social media accounts. They've also gotten the prime minister, premier of Ontario, mayor of Toronto and numerous other politicians to (directly or indirectly) denounce the small restaurant that has "I love Gaza" painted in its window. A CIJA action alert to its members states, "antisemites MUST be held accountable. We will never hesitate to take strong legal action against business owners in our city who declare Zionists are 'not welcome'. UJA's [United Jewish Appeal] advocacy agent the Centre for Israel and Jewish Affairs (CIJA) is calling on the Ontario Human Rights Commission to hold Foodbenders accountable for its discriminatory stance against our community. But we need your support! If you feel Foodbenders' anti-Zionist position discriminates against you, please add your name to this important statement."

B'nai B'rith has also put out dozens of tweets about the restaurant and different ways to bankrupt it. One statement calls on its supporters to "contact 311@toronto.ca to request that Foodbenders have its business license investigated. Be sure to mention section 27 of By-law No. 574-2000, which prohibits the use of a licensed business to 'discriminate against any member of the public' on grounds of 'race, colour, or creed.' Attach screenshots if you can."

Friends of Simon Wiesenthal Center and Honest Reporting Canada have put out dozens of tweets supporting efforts to bankrupt the social justice minded business. The Israel-based International Legal Forum filed a complaint with the Human Rights Tribunal of Ontario against Foodbenders' owner Kimberly Hawkins. In what is thought to be the first time the International Holocaust Remembrance Alliance's definition of anti-Semitism has been employed in this way, they are claiming that under its stipulations the restaurant owner should be charged with discrimination.

The more liberal end of the Israeli nationalist establishment has also joined the pile on. Former Canadian Jewish Congress president and current chair of the Canadian Anti-Hate Network, Bernie Farber, has repeatedly denounced the restaurant and so has the Canadian Jewish Record, a publication he recently established. In one tweet Farber denounced "the antisemitic tropes used by Food benders."

Hawkins has being attacked incessantly since an Instagram post of hers began circulating last week that stated, "Open Now - 8 PM for non-racist shoppers #Bloordale #Bloorstreet, #Toronto, #Open, #ftp [f*ck the police] #FreePalestine and #ZionistsNotWelcome." The anti-Palestinian lobby pounced on the #ZionistsNotWelcome hashtag.

(While "for non-racist shoppers" and "#ZionistsNotWelcome" are entirely legitimate statements, they are near impossible to enforce and it is questionable to block someone with racist views from purchasing a sandwich, as Hawkins immediately explained.)

In response to Hawkins' refusal to back down from her support of Palestinian rights, Jewish Defence League thugs held a rally in front of Foodbenders on Sunday. During their hate fest they scrubbed a Palestinian Lives Matter marking from the sidewalk and, similar to what Jewish supremacist settlers do to Palestinian homes in the occupied West Bank, someone painted the symbol on the Israeli flag onto the restaurant window. Alongside painting Stars of David on her storefront, Hawkins has faced a bevy of online abuse. The Foodbenders owner has been called a "dirty Palestinian whore" and told "Palestine sucks I will burn your business down" and "I hope your family gets trapped inside the restaurant when it burns."

In the dozens of tweets and statements they've put out about the restaurant B'nai B'rith, CIJA, Wiesenthal Centre, Honest Reporting Canada and Farber have all stayed mum on JDL's acts of hate, which were carried out in broad daylight and filmed (CIJA referred to "vandalism" in one tweet). This isn't surprising. Despite the JDL's racism and violence, the Jewish establishment has tacitly accepted or actively supported its often-violent targeting of Palestine solidarity campaigners.

After JDL supporters attacked peaceful pro-Palestinian activists protesting a presentation by Israeli military reservists at York University in November, the establishment Jewish organizations cried "anti-Semitism". Last year JDL, B'nai B'rith and CIJA worked with Toronto City Councillor James Pasternak in a bid to have the city block Al Quds Day. Banned in the US and Israel, JDL participates in the annual Walk for Israel organized by United Jewish Appeal of Greater Toronto. JDL has also been allowed to recruit in Jewish high schools and during Israel's 2014 destruction of Gaza the JDL and B'nai B'rith co-sponsored a counter-demonstration and the group provided "security" for a Canadians for Israel rally.

While it's not uncommon for Israel lobby groups to mount vicious smear campaigns attempting "cancel" their opponents, the over-the-top nature of the recent effort may reflect their unease. Israel's plan to formally jettison the two-state solution and the role Palestine played in Canada's failure to gain a UN Security Council seat has the potential to seriously shake their grip over Canadian policy on the issue. Maybe they view the thrashing of a small left-wing food vendor as a way to reassert their grip over the politics of the issue. The Palestine solidarity community should seek to blunt CIJA, B'nai B'rith and the JDL's effort to bankrupt Foodbenders.

Please take one minute to send an email to major Toronto media to ask them why they have not covered JDL's outrageous attack against Foodbenders.

If you can donate here is a go fund me campaign to support the pro-Palestinian restaurant.

Related Topic(s): Israel; Israel Lobby; Israeli Racism, Add Tags
Add to My Group(s)
Go To Commenting
The views expressed herein are the sole responsibility of the author and do not necessarily reflect those of this website or its editors.