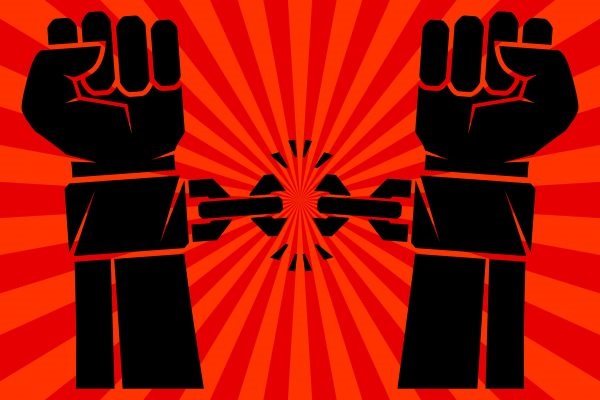 "Lockdowns are meant to condition people to obey without question. A nation of people who just do what they are told by the "experts" without question is a nation ripe for a descent into total tyranny." -Ron Paul.

Donald Trump calls the media "the enemy of the people", but it's much worse than that. The media is a national security threat. Just look at the way they've handled the coronavirus. The hysterical 24-7 coverage has people so terrified they've locked themselves in their homes inflicting catastrophic damage on the economy. That disaster never would've taken place if the media hadn't focused all their energy on scaring people to death. Now the damage is done, millions of people have lost their jobs, tens of thousands of small and mid-sized businesses are facing bankruptcy, and the world's biggest economy has been reduced to a smoldering wastelands. And what was gained? Nothing. Check out this excerpt from an article by economist Jack Ramsay:

"Once the contraction in the real economy accelerates and deepens, it inevitably leads to defaults and bankruptcies". The defaults and bankruptcies then provoke a financial crisis that feeds back on the real economy, causing it to deteriorate still further. Income losses by businesses, households and local government thereafter in turn cause a further decline. Once negative feedback effects within the economy begin, it matters little if the health crisis is soon abated. The economic dynamic has been set in motion. ".The Fed.. can make a mass of free money and cheap loans available, but businesses and households may be reluctant to borrow, preferring to hoard their cashand the loans as well. In other words, the deeper and faster the contraction, the more difficult and slower the recovery" ("The Myth of V-Shape Economic Recovery", Jack Rasmus).

Every sector of the economy is shrinking and shrinking fast. Oil prices have plunged, activity in all 50 states is slumping badly, business confidence is at record lows, personal spending continues to shrivel, consumer confidence is dropping sharply, the service sector is tanking, restaurant traffic, industrial production, manufacturing, corporate earnings, business investment, personal consumption, bank lending, imports-exports; are all down, down, down and down. There's not a glimmer of light to be seen anywhere. The economy is in freefall while people remain hunkered down inside their homes thinking they are stopping the spread of a deadly virus. But lockdowns don't stop infections, at best they postpone them to a later date, and even that is doubtful.

Get the picture? There was no lockdown, no time, NEVER.

But just ask someone about the lockdown today and they'll announce with absolute certainty, "It's the only way to beat this thing". Right, by locking yourself indoors and waiting for the economy to crash, is that it?

Three bulletpoints you won't see in the MSM:

Related Topic(s): Corona Virus Coronavirus Covid-19; Disaster Preparedness; Disasters; Disease-Epidemics; Economic; Economics; Economy; Health; Lockdown; Media; (more...) Shutdown; Unemployment, Add Tags  (less...)
Add to My Group(s)
Go To Commenting
The views expressed herein are the sole responsibility of the author and do not necessarily reflect those of this website or its editors.