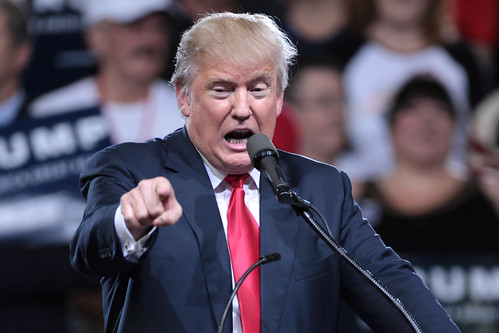 When I was growing up in the Jim-Crow/apartheid Deep South in the 1950s -- in Florida, the second state to secede from the Union -- a constant refrain from a good share of white citizens was "the South shall rise again." Some of those parroting that sentiment were only half-serious; their comment was more wish-fulfillment and resentment at their side having lost the Civil War. But, for many members of the Klan and White Citizens Councils, and their more "respectable" supporters and enablers, they were deadly serious about a future rising to restore their white privileges.

Many felt they could not say these things openly, so they couched their supremacy goals under a professed fealty to "our unique 'Southern heritage'," which, translated, referred to the dominance of whites over blacks, usually under the euphemism of "states' rights." Flying the Confederate flag on state buildings, placing statues of defeated Southern generals on state property, naming boulevards and state highways for Rebel heroes and so on -- this behavior derived, they said, from pride in their "Southern way of life."

This kind of overt and covert racism against blacks, and the parallel anti-Semitism that often accompanied it, was like a virus that mostly was dormant in normal times, but which existed just below the surface, always ready to spread its toxic pus of hate and violence in times of social stress.

White cops brutalizing and harassing blacks and Hispanics was the norm where I lived. Slavery may have been settled on paper by the Civil War and Amendments 13-15 to the Constitution, but, given the strength of the white-supremacy meme in the general body politic, it was only a matter of time before that inbred racism was adopted in other Southern states, and then outside the South. And we're seeing the horrific results of that sad reality all over the country these days, egged on for many decades by extreme right-wing pundits and demagogic politicians. Trump didn't emerge spontaneously; the strains of prejudice and authoritarianism had been implanted and nurtured in America's gardens of hatred for many decades.

How could it be otherwise? America was born with the original sin of slavery. Later, when the framers were allocating status and citizenship, African-Americans were not accorded full humanity; a black was worth only 3/5ths of a white person. Many of the Founding Fathers were themselves slave-holders.

Bernard Weiner, Ph.D. in government & international relations, has taught at universities in California and Washington, worked for two decades as a writer-editor at the San Francisco Chronicle, and currently serves as co-editor of The Crisis Papers (more...)
Related Topic(s): African-americans; Apartheid; Authoritarianism; Bigotry; Donald Trump; Police; Slavery; South, Add Tags
Add to My Group(s)
Go To Commenting
The views expressed herein are the sole responsibility of the author and do not necessarily reflect those of this website or its editors.