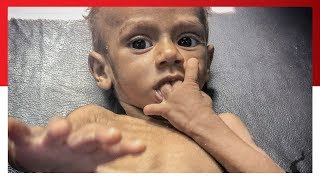 Yemen on the Brink of Famine
(Image by YouTube, Channel: Save the Children USA)   Details   DMCA
>

When the new Congress convenes Jan. 3, it is expected to pass a House resolution upholding congressional war powers and ending all direct U.S. involvement in the Saudi coalition's war in Yemen. But hopes remain high that H. Con. Res. 138 will help to end the Yemen war itself. Congressional strategists and activists who have been working on the issue believe passage of the war powers measure will force Saudi Crown Prince Mohammed bin Salman to the negotiating table.

Together, they are challenging the position of some former Obama administration officials who have warned the war powers resolution alone cannot bring the conflict to a close. Those former officials, led by Brookings Institution fellow Bruce Riedel, say that cutting off the Saudi pipeline of spare parts is the only way to prevent further airstrikes, which have been central to the Saudi war strategy.

Proponents of the war powers resolution, sponsored by Democratic Rep. Ro Khanna of California, argue the Saudis will not be able to continue the war without the political-diplomatic support of the United States, and the Yemen resolution will make dramatically clear the Saudis can no longer count on U.S. support. How the Senate came to pass a version of the Yemen resolution, co-sponsored by Sen. Bernie Sanders, I-Vt., Sen. Chris Murphy, D-Conn., and Sen. Mike Lee, R-Utah, and ratified in December by a vote of 56 to 41, would appear to lend support to their argument.

Until 2018, the Obama and Trump administrations had successfully avoided any congressional move to block U.S. support of the Saudi-Emirati bombing of civilian targets in Yemen, or the country's air and naval blockade. That success was possible, at least in part, because the U.S. media largely ignored the mass starvation of the Yemeni people and unprecedented cholera epidemic these acts of aggression had wrought.

The media also failed to report on the United States' direct role in that conflict. From mid-2017 to mid-2018, MSNBC ran only a single story that mentioned the United States' in-flight refueling of Saudi planes and its provision of intelligence for Yemeni bombing targets.

Nevertheless, some key members of Congress were well informed about the United States' complicity in the Saudi coalition's crimes. As early as March 2018, when Sens. Sanders and Lee first introduced the Yemen war powers resolution, a head count by the office of co-sponsor Chris Murphy indicated it would pass the Senate with a narrow majority.

Several of those votes were lost in May to legislation by Sen. Todd Young, R-Ind., and Sen. Jeanne Shaheen, D-N.H., which required the secretary of state to "certify" that Saudi Arabia was making efforts to end the war, increase access to humanitarian goods and "reduce harm to civilians."

But this fall, a tragic event and dramatic revelations created new impetus for a Yemen war powers resolution: Washington Post journalist Jamal Khashoggi was killed and hard evidence emerged that Crown Prince Mohammed bin Salman and the Saudi government had ordered his murder and dismemberment over his critical coverage. The political impact of that story can hardly be exaggerated. Whereas before, the media had been reluctant to report on the war, they were suddenly eager to document its myriad atrocities, including the ongoing starvation of Yemeni children.

The pressure on President Donald Trump to abandon his unflinching support of the Saudi regime intensified. Administration officials knew full well the Saudi coalition was already planning to capture the key Yemeni port of Hodeida -- the country's lifeline for food imports and humanitarian goods. That assault was scheduled to begin on Nov. 3, and it would have further weakened the administration's case against a war powers resolution if one were brought to the Senate floor. The administration also knew by late October that Democrats likely would be taking control of the House of Representatives, where Republican leadership had successfully employed legislative tactics to prevent even a congressional debate on the Saudi-led war efforts.

Between Kushner's personal ties to Crown Prince Mohammed and the lure of tens of billions of dollars in arms sales, the Trump administration remained wedded to the Saudi regime. But it was now forced to make adjustments in its policy to try to shore up the collapsing congressional support for the war. So Secretary of Defense James Mattis and Secretary of State Mike Pompeo issued a call on Oct. 30 for a cease-fire in Yemen and peace negotiations within 30 days.

A careful reading of Pompeo's statement, however, reveals two key giveaways to the Saudi regime: It did not require the Saudis to halt their bombing until after the Houthis had halted missile strikes on Saudi and United Arab Emirates targets, and the Saudi coalition was only required to cease bombing "populated areas," evidently leaving it free to hit targets outside urban concentrations.

There would be more to come. After discussions with the Trump administration, the Saudi government officially requested on Nov. 9 that the U.S. end the refueling of the coalition's aircraft for its Yemen operations. The Saudi statement said the coalition had "increased its capability to independently conduct in-flight refueling in Yemen," and had therefore requested, "in consultation with the United States," the "cessation of in-flight refueling support."

Related Topic(s): Congress; Legislation; Reality; Starvation; Yemen War, Add Tags
Add to My Group(s)
Go To Commenting
The views expressed herein are the sole responsibility of the author and do not necessarily reflect those of this website or its editors.