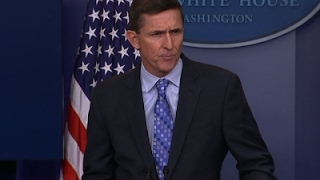 If Michael Flynn was forced to resign, it was a foregone conclusion that the Trump/Bannon/Miller-run White House would distance itself from "Flynn's" actions. Appearing telephonically on MSNBC, retired four-star general Barry McCaffrey, however, said he could not imagine a scenario in which Flynn could have communicated with Russian officials regarding sanctions without then-President-elect Trump being on-board. If true, that leaves one dangerously irresponsible individual separated from the national security apparatus and at least one other in total control of it.

Russia does not appear to be on-board.

Multiple reports circulating today indicate a substantial increase in provocative military acts by Russia toward US assets: a Russian spy ship (in international waters) off the Delaware coast, the deployment of a ground-launched cruise missile in violation of the 1987 Intermediate-Range Nuclear Forces (INF) Treaty, and reports of Russian war planes "buzzing" a US destroyer operating in the Black Sea.

It should be noted that these acts, taken individually, don't necessarily indicate impending conflict, and as always the US is at least as guilty as the Russians, particularly in the Russian view. But the timing is strange. We have a newly sworn-in president who is virtually effusive in his praise for Russian president Vladimir Putin and seemingly giddy at the prospect of improved relations. So why the saber-rattling?

If we are looking at conditions that have changed, the ostracizing of Michael Flynn is at the top of current events programming. The interesting thing here is the now-viral out-take from the Justice Department warning to the White House that Flynn could be vulnerable to Russian blackmail. Presumably, Flynn was reticent about admitting to transition-team leaders that he had discussed US sanctions with Russia prior to having the official capacity to do so. But that doesn't add up.

That would have required Flynn to be making commitments for Trump without Trump's knowledge or consent. Neither Flynn nor his Russian counterpart would have shown up for that meeting. He had to have been, as McCaffrey pointed out, acting under authority. So if that did not make Flynn susceptible to blackmail, what did -- and is it causing increasing US-Russian tensions?

It also bears noting that blackmail is not now mentioned for the first time in this saga. Blackmail as a concern for Trump himself was at issue in considering the much-maligned Christopher Steele dossier. In retrospect, one might wonder whether the dossier was the iceberg or the tip.

Donald Trump has spent his entire life being very, very sure that he is in total control of events around him and impervious to failure. But that's not what his CV says. A closer look at Trump's less than exemplary past includes an alarming history of train wrecks that he walks away from, but others do not.

Related Topic(s): Blackmail; Country First; Putin, Add Tags
Add to My Group(s)
Go To Commenting
The views expressed herein are the sole responsibility of the author and do not necessarily reflect those of this website or its editors.