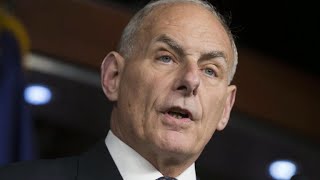 Considering what's usually found in this space the following will be somewhat of a departure.

Last Monday President Trump named retired ex-general John Kelly as his new chief of staff. Truthfully I never knew much about the guy, even his being head of Homeland Security prior to becoming Trump's Chief of Staff.

Normally I wouldn't put much stock in what happens in this White House insane asylum. What caught my eye is one of the first things Kelly did after his appointment was fire White House Communications Director Anthony Scaramucci, the bombastic blowhard who had been appointed to the post just two weeks earlier and headlines had him bad mouthing Reince Priebus, now former chief of staff as well as Steve Bannon, the White House Chief Strategist.

So with all this happening I felt the need to do a little research about this guy Kelly-which didn't include much on his 30 year career as a marine.

What struck me most in what I did read about him he was a no- nonsense guy who believed in the chain of command-which shouldn't be a great revelation considering he had been a four star general in the Marine Corps-but also immediately after his appointment he told everyone if they wanted to see the president they had to go through him first. There would no longer be just anyone going into the Oval Office whenever they felt like it including Trump's daughter Ivanka Trump and her husband Jared Kushner. Both agreed to abide by the new rules set by Kelly. Apparently Trump had encouraged advisers to see him whenever they pleased. Obviously Kelly got Trump to agree such practices had to end before he would take the job. Kelly as Homeland Security chief had been in White House staff meetings and his no nonsense approach often got Trumps attention and approval.

Now why is Kelly as Trump's new chief of staff important? Well to say the least, inner turmoil and palace intrigue characterized this White House and apparently the Trumpster encouraged the idiocy. Couple this with his impetuous behavior, twittering away as he reacted to everything, it's clear this White House was in total disarray. Throw in the constant berating by Democrats and the corporate MSM of his collusion with Russian President Vladimir Putin who helped get him elected-absolutely ridiculous-the threats Trump's made against North Korea, Iran, his firing missiles into Syria believing impetuously without evidence Syrian President Bashar Assad had gassed his own people to say nothing of the ongoing provocations against Russia and China, both nuclear superpowers and there being some narcissistic, impulsive crazy in the White House with no adults as close advisers is tantamount for anything to happen including initiating nuclear war.

But getting back to Kelly. I read where listening to one White House adviser drone on endlessly he interrupted the guy in mid sentence saying to him "that's nonsense". So Kelly isn't one to suffer fools.

Reading other tidbits apparently Kelly is no political animal and with the aforementioned palace intrigue characterizing this White House that will almost certainly come to an end as Trump himself has agreed with Kelly being the gatekeeper.

Of course we'll see what happens. But certainly at least one adult in the White House with no nonsense clarity is a good thing and maybe Kelly can influence Trump from making wrongheaded decisions; no small undertaking to be sure.

Maybe Kelly can impart some sanity in a White House where none existed before.

Again we'll have to wait and see.

Retired. The author of "DECEIT AND EXCESS IN AMERICA, HOW THE MONEYED INTERESTS HAVE STOLEN AMERICA AND HOW WE CAN GET IT BACK", Authorhouse, 2009
Related Topic(s): Chief Of Staff; John Kerry; Trump Presidency, Add Tags
Add to My Group(s)
Go To Commenting
The views expressed herein are the sole responsibility of the author and do not necessarily reflect those of this website or its editors.