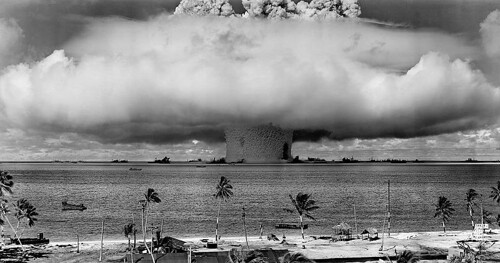 Photo of nuclear mushroom cloud from nuclear test in the 1950's.

How do the American people deal with those in charge who are mad, psychotic, criminally insane?

Because here in the US the crazies are not on the fringe. They are at the epicenter. Call them what you will. The "deep state", the elites, neo-cons, military/industrial/political complex, heads of the CIA, NSA, FBI et al. They're all an integral part of the un-elected power which "official" Washington follows regardless of who sits in the White House or which party controls Congress. "Official" Washington are just stooges carrying out orders.

The latest madness they've come up with is the "Nuclear Posture Review" which is a blueprint for nuclear war, though inversely it purports to lowering the threshold for a nuclear conflagration.

Finian Cunningham put it, "the explicit go-ahead by Washington... is the development of so-called 'low-yield nuclear warheads'. The dangerous consequence? The notion that a limited nuclear war may be feasible. Thus a greater risk of 'low-yield' nuclear weapons being deployed in action. But the real danger is that the threshold will then be lowered for escalation to strategic weapons of mass destruction."

Think about it. A war where the US initiates the use of "low-yield" nuclear weapons against states with huge nuclear weapons arsenals with the expectation this won't escalate to a full-fledged nuclear conflagration.

The assumption being "MAD", mutually assured destruction the cold war understanding recognized by the US and the Soviet Union that any first use of nuclear weapons assured massive nuclear retaliation by the other side, doesn't apply any longer.

So "MAD" has become anachronism. That is madness. There is no other way to put it.

Once nuclear weapons are used in a war, even these so called "low-yield" nuclear weapons, escalation would be impossible to contain. There would be thousands dead immediately on the battlefield, untold thousands more dying from radiation poisoning. All this occurring and the other side particularly Russia-which is the primary focus in the crosshairs of the NPR- wouldn't retaliate? And not only that; they wouldn't retaliate directly on US soil. That is absolutely absurd.

The American people need to understand, any use of nuclear weapons no matter how "low-yield", against another nuclear power will bring a certain retaliatory nuclear strike on American soil.

Are the elites who gave us this NPR so naive or are they crazy? What are they planning to do once nuclear war escalates? Live in underground bunkers for a few years until the nuclear dust settles then emerge as "survivors". Is this what they are planning and preparing for?

The American people could stop the madness. The question is will they?

Because first they have to fully comprehend the danger.

Retired. The author of "DECEIT AND EXCESS IN AMERICA, HOW THE MONEYED INTERESTS HAVE STOLEN AMERICA AND HOW WE CAN GET IT BACK", Authorhouse, 2009
Related Topic(s): Neo-cons; Nuclear Attack; Nuclear Containment; Nuclear War; Nuclear_insanity; Risk, Add Tags
Add to My Group(s)
Go To Commenting
The views expressed herein are the sole responsibility of the author and do not necessarily reflect those of this website or its editors.