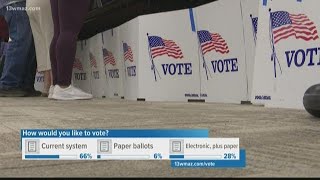 A new precinct-based voting system being widely acquired by states and counties before 2020 that relies on printed bar codes to record votes, not handmade ink marks, may pose problems for independent efforts seeking to double-check election results.

The Express Vote, from the nation's largest voting system vendor, Election Systems and Software (ES&S), is a ballot-marking device. It asks voters to touch a computer screen instead of using a pen to mark a paper ballot. After voters make their choices, it prints a ballot summary card with bar codes at the top and text underneath listing their votes.

Election integrity activists have criticized this approach for redefining what constitutes a paper ballot by replacing a hand-marked record with a computer-marked record. They say that moves away from direct evidence of voter intent and creates a target for hackers.

However, there's another step in this process that has drawn little scrutiny, but could pose difficulties in independently verifying the results. Once the voter is finished, the summary card goes into a second machine, a scanner, which reads the bar codes to tabulate votes.

Currently, it appears that only one large jurisdiction, the state of Maryland, has tried to double-check this system's accuracy. In a suburban county last year, where thousands of people used Express Vote after paper ballots ran out, the state's third-party auditor found that 3 percent of the bar codes recorded by the system's scanner, ES&S's DS200 model, were unreadable. (The audit firm used the text below to assign those ballots' votes.)

The audit firm, Boston's Clear Ballot, is a competitor with ES&S. But its technology includes what are arguably the country's most advanced tools to analyze digital images of ballots, such as those created by ES&S's scan of its Express Vote ballot summary cards. Its ex-CEO cited the unreadable bar code rate, which Maryland officials confirmed.

When ES&S was asked how this gap was possible and to comment, its spokeswoman Katina Granger replied, by email, asking what the source of the 3 percent figure was. After this reporter recounted the 2018 experience from Maryland's use of Express Votes and the DS200, she replied that ES&S was "still researching your question."

"We have no immediate information at hand on this, so we are reaching out to the customer for information," she said. "As a side note, ExpressVote paper ballots are always 100% auditable, and it's the human text that is audited."

That last point is debatable. Voters using the Express Vote are asked to verify the text on the summary card before turning them in. But, as ES&S's website explains "How are Ballots Read?" their system reads bar codes to count votes, not text seen (and sometimes verified) by voters.

An apparent 3 percent discrepancy in official tabulation record -- seven among one part of the ballot data chain -- is significant. Three percent is larger than the margin automatically triggering recounts in 19 states and the District of Columbia. It is also larger than margins in 23 other states that allow recounts under other circumstances. Partisans who challenge election results typically cite any inconsistency if it helps their side to win.

Currently, the number of jurisdictions acquiring the Express Vote ballot-marking device is much smaller than the 1,200 jurisdictions nationwide that use DS200 scanners, whose models date back a decade. (A higher-speed ES&S scanner, the DS850, is often found in these same jurisdictions for processing absentee ballots -- those arriving by mail.)

However, with the lone exception of Maryland's effort, there's an absence of independent assessments on whether there may be audit problems with ES&S's new precinct system, technology that may be used for years. The difficulties observed by Maryland's auditor might be an isolated incident. Or they may point to new issues, namely, that unreadable bar code records will grow as Express Votes, paired with ES&S scanners, come online. (A similar concern could apply to other vendors' ballot-marking devices and scanners.)

Maryland's experience poses two big questions: Why did this happen, and do states and counties know what they are acquiring when it comes to verifying future results?

Related Topic(s): Hackers; Scanners; Voting Integrity; Voting Machines; Voting Results; Voting-machine Errors, Add Tags
Add to My Group(s)
Go To Commenting
The views expressed herein are the sole responsibility of the author and do not necessarily reflect those of this website or its editors.