Is it possible that 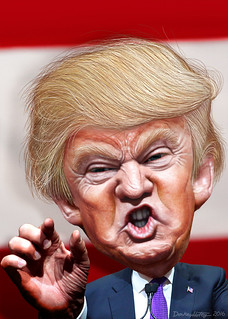 Donald Trump - Caricature
(Image by DonkeyHotey)   Details   DMCA
ant to be President, and is trying to lose the election on purpose? Consider these facts:
Fact: He continues to do all he can to alienate three of the largest minority groups in the nation.
Fact: He does nothing about his lack of popularity with women.
Fact: In addition, recent statements have now alienated the military and the NSA.
Fact: He has no campaign organization or strategy to speak of, and shows no sign of plans to do so.
Fact: His actions continue to separate him from the Republican Party's leadership.
Fact: His actions have inspired new movements within the Party to undermine his candidacy.
Fact: He once admitted that entering the race was just a lark, and that he never expected to be nominated.
Fact: He is exploring the possibility of starting his own cable tv network.
Fact: Wouldn't he see this as a spectacular way to build his brand, even if only in his own mind?
You have to admit, it makes as much sense as anything else he's done so far, and would be consistent with his flare for over-the-top self-aggrandisement..

Related Topic(s): Donald Trump Supporters; Trump Campaign, Add Tags
Add to My Group(s)
Go To Commenting
The views expressed herein are the sole responsibility of the author and do not necessarily reflect those of this website or its editors.