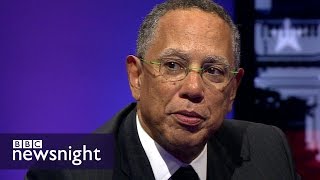 Dean Baquet, the executive editor of the New York Times, told the Times' employees on August 12 that the Times is refocusing from Russiagate to Trump-the-racist. Moreover, Baquet said, the Times is launching the 1619 Project that will "reframe" or reinvent American history. The purpose is to reduce the explanation of the United States to racism and slavery.

What, I wonder, is Baquet going to do when he has to confront the already "re-framed" history of the "Civil War," in which the United States at great expense and hardship and many deaths went to war to free black slaves in the South? How can Baquet reconcile racist white America with the re-framed history of the War Against Southern slavery?

Baquet has an agenda, which is to dehumanize and demoralize white Americans so that overwhelmed with guilt, they will accept their fate as their country is overrun by non-white immigrants. He has in the works for us a Camp of the Saints experience.

Perhaps Baquet's plot will fail, but perhaps not. When Cambridge University's white faculty and administrators accepted non-white political commissars assigned to their persons to insure that non-white people are not offended by offensive facts, words, and concepts, the concept of objective truth was undermined. When truth no longer matters, its place is taken by agenda. Note also that Cambridge has no consideration for white people who might resent the demise of academic freedom and the perversion of their own history in order to make non-whites feel better. Cambridge has abandoned not only academic freedom but also the core population of Great Britain. This suggests that Baquet's war against truth will go well.

A list of accomplishments of Western Civilization would include the concept of objective truth, which requires free speech and free inquiry, a rule of law that holds government accountable and prevents arbitrary arrest and punishment, evidence-based conclusions, a sense of justice, respect for life and property. We can add others, and there are scientific, technological, artistic, musical, and architectural achievements. But the short list provides the gist of Western Civilization's achievements. How can the New York Times explain these achievements in terms of racism and slavery? Does Baquet intend to simply erase these achievements? Do they go down the memory hole?

As Baquet believes he can explain President Trump in terms of racism and white supremacy, perhaps he thinks it is no big deal to explain the entire country and its history this way. Baquet's project has a lot of facts to overcome, but it fits the agenda of Identity Politics, the ruling ideology of the Democratic Party and the American liberal/progressive/left. Be prepared to see many facts shouted down or ignored.

Related Topic(s): Campaign Related; Dean Baquet; History; Media New York Times; Politics; Racism; Trump, Add Tags
Add to My Group(s)
Go To Commenting
The views expressed herein are the sole responsibility of the author and do not necessarily reflect those of this website or its editors.