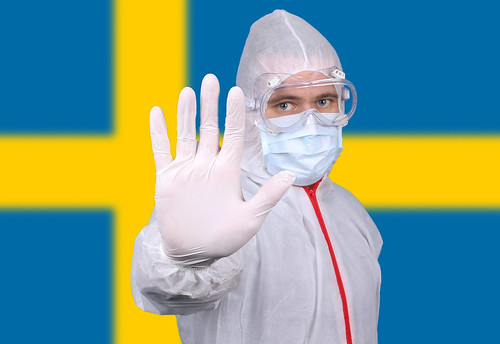 Sometimes, the best thing to do, is to do nothing at all. Take Sweden, for example, where the government decided not to shut down the economy, but to take a more thoughtful and balanced approach. Sweden has kept its primary schools, restaurants, shops and gyms open for business even though fewer people are out in public or carrying on as they normally would. At the same time, the government has kept the Swedish people well-informed so they understand the risks the virus poses to their health and the health of others. This is how the Swedes have minimized their chances of getting the infection while avoiding more extreme measures like shelter-in-place which is de facto house arrest.

What the Swedish experiment demonstrates, is that there's a way to navigate these unprecedented public health challenges without recklessly imposing police state policies and without doing irreparable harm to the economy. And, yes, the results of this experiment are not yet known, but what we do know is that most nations cannot simply print-up trillions of dollars to counter the knock-on effects of bringing the economy to a screeching halt. These countries must dip into their reserves or take out loans from the IMF in order to recover from the lack of production and activity. That means they're going to face years of slow growth and high unemployment to dig out from the mess their leaders created for them.

And that rule applies to the US too, even though the government has been recklessly printing money to pay the bills. The unforeseen cost to the US will come in the form of long-term unemployment triggered by millions of failed small and mid-sized businesses. That grim scenario is all but certain now. And just as the USG "disappeared" millions of workers from the unemployment rolls following the 2008 Financial Crisis- forcing them to find low-paying, part-time, no-benefits work in the "gig" economy- so too, millions of more working people will fall through the cracks and wind up homeless, jobless and destitute following this crisis. One $1,200 check from Uncle Sam and a few weeks of unemployment compensation is not going to not be enough to prevent the fundamental restructuring of the US labor force that will be impossible to avoid if the economy isn't restarted pronto.

That's why we should look to countries like Sweden that have taken a more measured approach that allow parts of the economy to continue to function during the epidemic, so other parts can gear-up quickly and return to full capacity with minimal disruption. This should not be a "liberal vs conservative" issue as it's become in the United States. One should not oppose restarting the economy just because Trump is 'for it', but because millions of working people are facing an uncertain future in an economy which- most economists believe- is headed for a severe and protracted recession. Liberals should be looking for ways to avoid that dismal outcome instead of wasting all their time criticizing Trump. (Of course, now that the idiot Trump has appointed Ivanka, Jared, Kudlow and Wilbur Ross to lead his Council to Re-Open America" it will be impossible to extricate the issue from partisan politics.) This is a clip from an article by Donald Jeffries at Lew Rockwell:

"The shutdown of businesses now has been going on for more than a month. How many of the dwindling small businesses left in our casino economy have already closed down forever? How many mid-sized ones will ever be able to reopen? How many millions will be furloughed, laid off, fired- however they word it- because of this draconian reaction? How can an economy based on commerce exist without commerce?" ("The Locked Down World", Donald Jeffries, Lew Rockwell)

Indeed. This isn't a question of putting profits before people. The economy IS our life. Try to make a living without an economy. Try to feed your family or pay the rent or buy a car or do anything without an economy. We need the economy. Working people need the economy, and we need to find a way to do two things at the same time: Keep the economy running and save as many lives as possible. The idea that we can just do one of these things and not the other, is not only blatantly false, it is destructive to our own best interests. We have to do both, there is no other way. Here's more background on Sweden from an article at Haaretz:

"The truth is that we have a policy similar to that of other countries," says Anders Tegnell, Sweden's state epidemiologist, "Like everyone, we are trying to slow down the rate of infection " The differences derive from a different tradition and from a different culture that prevail in Sweden. We prefer voluntary measures, and there is a high level of trust here between the population and the authorities, so we are able to avoid coercive restrictions""

It's still too early to say whether Stockholm's policy will turn out to be a success story or a blueprint for disaster. But, when the microbes settle, following the global crisis, Sweden may be able to constitute a kind of control group: Did other countries go too far in the restrictions they have been imposing on their populations? Was the economic catastrophe spawned globally by the crisis really unavoidable? Or will the Swedish case turn out to be an example of governmental complacency that cost human lives unnecessarily?" ("Why Sweden Isn't Forcing Its Citizens to Stay Home Due to the Coronaviru", Haaretz)

Tegnell, is no long-haired, fist-waving radical, he's Sweden's chief epidemiologist and has worked for mainstream organizations like the WHO and the European Commission. Where he differs from so many of his peers is simply in his approach, which empowers ordinary people to use their own common sense regarding their health, their safety and the safety of others. It's simple, if you develop symptoms, stay home. Tegnell believes that its easier to get people to do the right thing by trusting their judgement then by ordering them to do so.

That said, Sweden's objectives are the same as every other country impacted by the pandemic. The emphasis is on "flattening the curve", slowing the rate of infection, testing as many people as possible, and protecting the vulnerable and older populations. It's just their methods are different. They've taken a more nuanced approach that relies on level-headed people conforming to the guidelines that help to minimize contagion until some better remedy is found. "Social distancing" is practiced in Sweden, but the population has not had their civil liberties suspended nor have they been put under house arrest until the threat has passed. Sweden has not compromised its core values in a frenzied attempt to stave off sickness or death. Can the U.S. say the same? Here's more from an article at the Washington Times:

"As government leaders in the UK and the United States are grappling with how to revive dormant economies, Dr. Tegnell said the Swedish approach will allow the country to maintain social distancing measures in the long term without putting the economic system at risk. Dr. Tegnell said he believes certain regions in Sweden are already very close to " a state where so many in the population have built up resistance to the virus that it is no longer a pandemic threat"

"We do believe the main difference between our policies and many other countries' policies is that we could easily keep these kinds of policies in place for months, maybe even years, without any real damage to society or our economy," Dr. Tegnell said. Although the government has not issued a stay-at-home order, many Swedes have decided to quarantine and practice social distancing on their own volition, Dr. Tegnell said." ("Top Swedish official: Virus rates easing up despite loose rules", The Washington Times)

The threat of pandemic is new to most countries, so it's not entirely fair to criticize their response. But, at this point, reasonable people should be able agree that implementing sweeping policies that inflict incalculable damage to the economy and on people's personal liberties is a gross overreaction that poses as big a threat as the pandemic itself. Leaders must be able to walk and chew gum at the same time. That's all we should expect of them: Just restart the damn economy while minimizing the risks of infection as much as possible. Is that too much to ask? Here's an excerpt from an article at MedicineNet:

"The financial ruin this pandemic has caused for many will almost certainly lead to increased suicide, mental illness, and physical health problems exacerbated by a loss of health insurance in countries without socialized medicine, according to the World Economic Forum. That's partly why both Sweden and Singapore have tried to keep life in their countries as normal as possible for as long as possible during the response. It does not explain the drastically different death tolls between the two countries, however".

Related Topic(s): Corona Virus Coronavirus Covid-19; Economic Shutdown; Pandemic; Shutdown; Social Distancing; Sweden, Add Tags
Add to My Group(s)
Go To Commenting
The views expressed herein are the sole responsibility of the author and do not necessarily reflect those of this website or its editors.