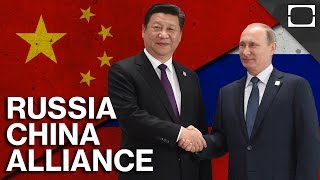 Why Do Russia And China Love Each Other?
(Image by YouTube, Channel: NowThis World)   Details   DMCA

Is Russia learning that Washington wants no deal with Russia except Russian vassalage, and that relying on agreements with the West is delusional? There is some indication that Russia is learning, but it seems to be a slow process.

Russia Insider reports that the Russian government has told Israel that Israeli strikes inside Syria are no longer acceptable.

Russia Insider also reports that when asked about Kiev using Russian focus on the World Cup to attack the Donetsk and Luhansk republics, Putin answered: "if that does transpire, there will be harsh consequences for Ukraine's sovereignty in general."

These are reassuring statements that Putin has learned that turning the other cheek to Washington and Israel does not lead to diplomatic solutions but to further provocations. Nevertheless, Putin still appears to hold on to his belief in agreements. Putin said that the solution was for Ukraine to comply with the Minsk Protocol.

The Minsk Protocol reincorporates the Donetsk and Luhansk republics in Ukraine, which is what the Russian government wants as the Russian populations of these breakaway republics would offset to some extent the Nazi elements in Western Ukraine and, thereby, maintain some political balance within Ukraine.

The defect in the Russian policy is that it overlooks that Ukraine is a Washington vassal and that Washington intends to use its vassal to foment problems for Russia. It is naive for Putin to ascribe the pending violence as a consequence of the political difficulties of the Ukrainian president. The pending violence shows Washington's determination either to discredit Putin with Russian nationalists by his refusal to defend the Russian populations from Ukraine's attack, or, if Russia does intervene, to demonize Russia as an aggressor that has again invaded Ukraine.

It is difficult to comprehend how the Russian government got the idea that Washington was going to permit Ukraine to return to a reasonable relationship with Russia. This idea is so unreasonable and improbable that my conclusion is that Russia has a lot more to learn.

The Russian government seems unaware that Washington has already in effect declared war on Russia. To be legal, sanctions must be imposed by the United Nations. The sanctions imposed on Russia are unilateral US actions and, thereby, strictly illegal. They comprise an American attack on Russia. In response, Russia has done virtually nothing.

The Russian government fails to protect its citizens. As the Russian Foreign Minister Sergei Lavrov has said, to end her harsh treatment -- essentially torture -- Maria Butina agreed to a plea bargain so that she could be convicted in the absence of evidence.

Butina's attorney, Dan Kovalik, stated the truth when he said: "They broke her. They abused her. They sexually assaulted her in jail, and now she's pleading guilty. People should be very shocked by this. Women's rights groups should be shocked by this, because initially they claimed without any basis that she was selling sex for access, and that turned out to be a lie, and they withdrew that charge. How she's been treated is absolutely despicable."
See here and here.

After being illegally tortured, Butina was subjected to an illegal show trial in order to buttress the fake news that Russia is a threat. The Russian government complained, but that was it.

There are many Americans all over Russia that could be truthfully arrested as spies. Why did not Russia round up several dozen, or several hundred, and subject them to the same conditions? At least the Chinese detained two Canadians in response to Canada's illegal arrest of the Chinese corporate executive for Washington. Ron Unz has shown China what to do -- but the Chinese leadership seems more interested in money than in raising the prestige of their country by exercising the power it has in its hands.

Russia and China are making some progress in catching on, but they still have a long way to go.

Related Topic(s): Donetsk; Israel; Naive; Russia And China; Russian Foreign Policy; Ukraine; Vladimir Putin, Add Tags
Add to My Group(s)
Go To Commenting
The views expressed herein are the sole responsibility of the author and do not necessarily reflect those of this website or its editors.