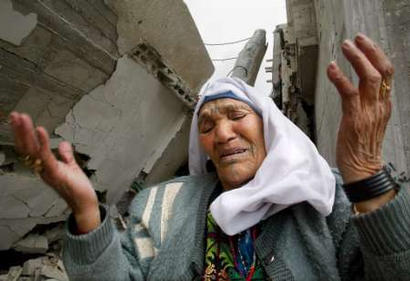 (Image by Unknown Owner)   Details   DMCA
A long version of the headline question would be something like this: Given that in the 46th year of Israel's occupation of the West Bank, Jewish settlers are continuing to consolidate their hold on the territory's land and water resources by stealing more and more of both, thus demonstrating not only Zionism's contempt for international law but, also, that the only peace Israel's leaders are interested in is one that requires a complete Palestinian surrender to Zionism's will, is there any real prospect, in any foreseeable future, of justice for the Palestinians?

It is probably still the case that, in the name of Arafat-like pragmatism, a majority of the oppressed Palestinians would regard the establishment of a state of their own on the West Bank and the Gaza Strip with East Jerusalem its capital as an acceptable minimum amount of justice.

They are, of course, fully aware that in such a scenario the right of return for those dispossessed of their land and their rights in 1948 and again in 1967 would have to be limited to return to the territory of the Palestinian mini state, which would mean, because of the lack of space, that only a relatively small number of the dispossessed Palestinians and their descendants would be able to return. (Arafat and his leadership colleagues calculated that initially not more than 100,000 would be able to return). The rest would have to settle for financial compensation.

Beyond that, the Palestinians of a mini state would entertain the hope, as Arafat did when he persuaded the institutions of Palestinian decision-making to accept the need for unthinkable compromise with Israel (peace with it in return for only 22 percent of their land, thus legitimizing Israel's occupation of the other 78 percent) that a genuine two-state solution could lead in one or two generations to one state by mutual consent. In that event there would be greater scope for more diaspora Palestinians to exercise their right of return.

But it isn't going to happen. Though not yet buried, the two-state solution has long been dead, killed by Israel's colonization with the complicity of the major powers and, by default, the regimes of an impotent Arab Order. As I document in detail in my book Zionism: The Real Enemy of the Jews, the Arab regimes never had any intention of fighting Israel to liberate Palestine or using the leverage they have to press the U.S. to require Israel to end its occupation of land grabbed in 1967.

As I also reveal in my book, the most explicit statement about why the two-state solution has long been dead was made to me in early 1980 by Shimon Peres. He was then the leader of Israel's Labour Party, in opposition and hoping to win Israel's next election and deny Begin a second term in office as prime minister. I was then acting as the linkman in a secret and exploratory dialogue between Peres and Arafat. At a point in our very first conversation for this initiative, Peres said that he feared it was "already too late." I asked him why. He replied:

"Every day that passes sees new bricks on new settlements. Begin knows exactly what he's doing. He's creating the conditions for a Jewish civil war. He knows that no Israeli prime minister is going down in history as the one who gave the order to the Jewish army to shoot large numbers of Jews (to end the occupation)." Pause. "I'm not."

Obvious question. If it was too late in 1980 when there were only about 70,000 illegal Jewish settlers on the occupied West Bank including Arab East Jerusalem, how much more too late is it today when they number in excess of 500,000, with that number rising on an almost daily basis, thanks in large part to funding assistance from America's Christian fundamentalists?

In passing, it is interesting to note that the U.S. State Department has now defined Israeli settler violence against Palestinians as "terrorism."

It is now clear beyond any doubt that the most any Zionist leadership will offer the Palestinians for peace is a maximum of 35-40 percent of the West Bank (the Sharon plan) in the shape of two, three or four Bantustans which the Palestinians could call a state if they wished. This is, and always will be, totally unacceptable to all Palestinians.

As things are and look like going, I believe the course is set for a final Zionist ethnic cleansing of Palestine.

I mean that when Israel's leaders conclude that their policy of making life hell for the occupied Palestinians in the hope of causing them to abandon their struggle and leave in large numbers has failed, and that they can't bring on a puppet Palestinian leader who will force his people to accept crumbs from Zionism's table, they will create a pretext to drive the Palestinians off the West Bank and into Jordan or wherever. One possible pretext could come about with a classic false flag operation -- Mossad agents posing as Palestinian terrorists to plant bombs and kill Israeli Jews.

What about the Palestinians of the blockaded Gaza Strip? According to the latest UN report, it will not be "a liveable place" by 2020 unless action is taken to improve basic services in the territory. My guess is that in Zionism's plan for the future, the Gaza Strip's Palestinians will be left to sink deeper and deeper into poverty, misery and despair in the hope, Zionism's hope, that this will eventually cause large numbers of them to flee and seek a new life elsewhere. If that doesn't happen, Israel's leaders will have the option of creating a pretext for a Gaza Strip ethnic cleansing operation by military means.

After months of reflection, my conclusion is not only that the Zionist state of Israel is a monster beyond control but that Palestine IS a lost cause UNLESS...  The main purpose of this article is to put some flesh on the bone of what I see as the "Unless" Scenario.

In it there are two initiatives for the Palestinians themselves to take.

The first is to demand and insist upon the dissolution of the impotent and discredited PA (Palestine Authority) in order to make Israel completely responsible and therefore fully accountable for its occupation.

Without the PA's American trained security forces to keep the Palestinians of the occupied West Bank (Hamas supporters especially) under control for Israel, having to take complete responsibility for occupation would be costly financially and in terms of the additional call on Israel's own security resources.

Alan Hart is a former ITN and BBC Panorama foreign correspondent who has covered wars and conflicts wherever they were taking place in the world and specialized in the Middle East. He is a researcher and author and a participant at leadership level in the search for peace.
His Latest book
Related Topic(s): Arab; International; Israel; Jerusalem; Occupation; Palestine_and_Israel; Palestinian; Politics, Add Tags
Add to My Group(s)
Go To Commenting
The views expressed herein are the sole responsibility of the author and do not necessarily reflect those of this website or its editors.

Carter slams U.S. Supreme Court for its endorsement of corruption

Is Palestine a Lost Cause?

The Zionization of American politics and how it could be terminated

What might Netanyahu do when his American mob tells him Romney won't win?

What, Really, is Netanyahu's Game Plan for America?