US Pvt Bradley Manning is suspected of being the conduit for thousands of diplomatic cables delivered to Wikileaks last year. He is being held without charge and without trial in solitary confinement, in conditions that have been described by Amnesty International as "torture".
Now NBC reports that after having devoted vast resources to the investigation, the government has been unable to get enough evidence to indict Manning, let alone to convict him. Why are they still keeping him prisoner? No one has even proposed that he is violent, or a danger to himself or his unit, yet he is on "suicide watch", checked every 5 minutes, and confined to a 6x12 cell 23 hours a day.
One hypothesis: Perhaps it it doesn't matter so much whether they have the right man.  Perhaps they feel it is more important to send a message that will deter future whistleblowers than it is to implement justice, or to comply with the Constitution. 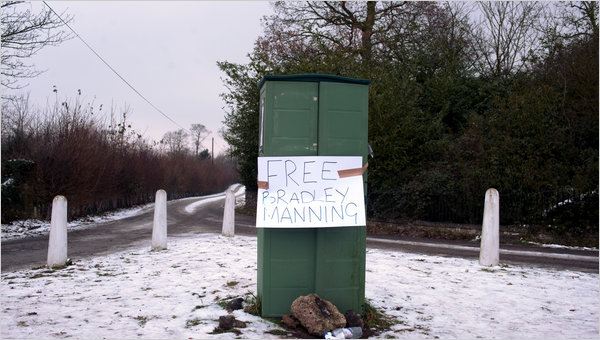 23-year-old Pvt Manning is being held in a small cell in a Marine compound in Quantico, VA.  Gradually, he is attracting a larger constituency of supporters who have protested on his behalf, and demanded his release. The NYTimes reports speculation that the motivation for Manning's mistreatment is "perhaps to pressure him to testify against Mr Assange."  One problem with this is that Wikileaks is structured to be extremely anonymous.  It is, by design, impossible for Assange or anyone else to determine who contributed any document, and there is no possibility of contact, even indirect, between Assange and Manning.  Nevertheless, criteria for "conspiracy" prosecution are far looser than espionage, and the Justice Department may be looking for ways to link Assange and Manning in a "conspiracy" to make prosecution feasible.

Related Topic(s): Conspiracy; Wikileaks; Wikileaks, Add Tags
Add to My Group(s)
Go To Commenting
The views expressed herein are the sole responsibility of the author and do not necessarily reflect those of this website or its editors.