"My concern is there are labs out there that are not up to snuff because they don't have that experience."
- Dr. Susan Butler-Wu


In order to eventually get students back in the classroom, school districts will have to institute testing programs to ensure that members of the school community infected with COVID-19 do not spread the virus. To gain the confidence of both parents and teachers, the implementation of this plan must be beyond reproach. Unfortunately, a report by KCBS/KCAL investigative reporter David Goldstein, calls into question the integrity of the program set up by Los Angeles Unified School District's (LAUSD) Superintendent Austin Beutner.

According to Goldstein, SummerBio had only been in business for three months when it was awarded the nearly $50 million contract with the LAUSD. While the company is licensed by the state, it has not yet received emergency use authorization from the FDA. Beutner made the selection "under emergency coronavirus powers" given to him by the LAUSD School Board at the onset of the crisis.

While the district says that SummerBIo "had the lowest price and fastest service", Goldstein's reporting also showed the company had political and economic ties to the Superintendent through its founder, Sky Dayton. From 2001 to 2003, Beutner had "served on the board of Dayton's company, Earthlink". Another business relationship existed through another Dayton company and Evercore, the venture capital company founded by Beutner that was also a controlling shareholder in the company that published the National Enquirer. Dayton was also a contributor to Beutner's campaign when he ran for mayor in 2011. 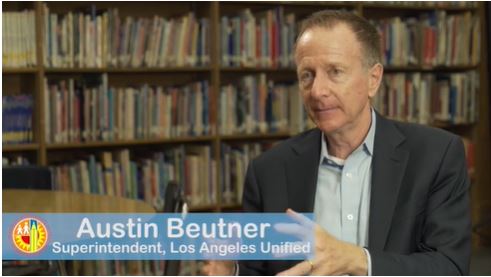 From the SummerBio website
(Image by SummerBio)   Details   DMCA
One of the actions that brought down John Deasy during the $1.3 iPad scandal was the fact that the former LAUSD Superintendent personally appeared in Apple promotional materials. In a move reminiscent of this scandal, Beutner appears on the front page of SummerBio's website. Identified as the LAUSD Superintendent, his appearance gives a seal of approval for a program that is in its infancy and in no way has proven itself.

The emergency powers that were given to Beutner were completely necessary at the time that the district was being enveloped by the crisis and decisions had to be made rapidly. Seven months later, the unexpected has become the status quo. It is time for the board to revoke the emergency powers and resume responsibility for setting district policy. They also need to review actions taken by the superintendent during the emergency period and ensure that ethics rules were followed.

Beutner's potential conflicts of interest were brought up as his initial hiring was rushed through during the waning days of the school board majority that was made up of charter school supporters. Included in his employment contract was a demand that he give up control of Vision To Learn, a non-profit that had a pre-existing contract with the LAUSD. Instead of conforming to the spirit of this clause, his wife was put in charge of the organization.

From the SummerBio website
(Image by SummerBio)   Details   DMCA
The ability to ensure that Beutner puts students' interests over his personal ones will depend greatly on the results of the November 3rd election in board district 3. Incumbent Scott Schmerelson was the only board member who had the courage to inform the public about the details of the hiring of Beutner's behind closed doors. In retribution against Schmerelson for spilling their secrets, one of his fellow board members filed a complaint with the city attorney. Schmerelson has also clashed with the Superintendent over his refusal to provide the information requested by the board member.

Schmerelson's opponent, Marilyn Koziatek, has a direct link to Beutner through her employment at Granada Charter School. Beutner served alongside disgraced Los Angeles City Councilman Mitch Englander on the school's fundraising foundation. One of Beutner's first official duties as Superintendent was to speak at the charter school's graduation ceremony.

Beutner leads the country's second-largest school district despite the fact that he had no previous background in education. The charter school majority that put him in power felt that his business experience was more important than his knowing how to educate students. The voters need to decide which side was correct when they enter the voting booth.
________________________________
Carl Petersen is a parent, an advocate for students with special education needs, an elected member of the Northridge East Neighborhood Council, a member of the LAUSD's CAC, and was a Green Party candidate in LAUSD's District 2 School Board race. During the campaign, the Network for Public Education (NPE) Action endorsed him, and Dr. Diane Ravitch called him a "strong supporter of public schools." For links to his blogs, please visit www.ChangeTheLAUSD.com