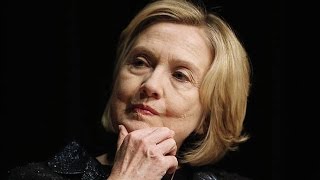 For nearly a year, Hillary Clinton failed to admit that her campaign and the Democratic National Committee had provided funding for the notorious dossier that alleged Trump colluded with Russia to win the 2016 presidential election. Then, two weeks ago, the Washington Post published a blockbuster article that proved that Clinton had been misleading the public about her Campaign's role in producing the report. Here's a snippet from the article in the Post:

"The Hillary Clinton campaign and the Democratic National Committee helped fund research that resulted in a now-famous dossier containing allegations about President Trump's connections to Russia and possible coordination between his campaign and the Kremlin, people familiar with the matter said."

Following the article's publication, Clinton went into hiding for more than a week during which time she huddled with her political advisers to settle on a strategy for dealing with the crisis. On Wednesday, she resurfaced on the Daily Show where she was treated with kid gloves; no hardball questions were asked and she was given plenty of time to recite her prepared remarks without challenge. Naturally, she downplayed her role in contributing to the year-long "hacking-collusion" investigation that has tied up both Houses of Congress, implicated the nation's main law enforcement and intelligence agencies, and deepened divisions between Washington and Moscow. Here's part of what Hillary said in the interview:

"When Trump got the nomination of the Republican Party, the people 'doing it' (gathering raw intelligence for the dossier) came to my campaign lawyer, and said, would you like us to continue it. He said 'Yes.' He is an experienced lawyer and knows what the law is. He knows what opposition research is. It's part of what happens in a campaign where you get information that may or may not be useful and you try make sure anything you put out in public arena is accurate. So this thing didn't come out until after the election and it's still being evaluated."

Clinton wasn't asked why her campaign tried to obfuscate their role in financing the dossier or whether she felt any remorse for the way the Russia hacking allegations had ballooned into four major investigations on Capitol Hill. She wasn't even asked to comment on the motives of the people who continued to fund the dossier after the DNC terminated their contract in November 2016. Wasn't she suspicious that these new financiers might have more nefarious objectives in mind, after all, who continues a smear campaign after the election is over, unless, of course, they intend to inflict even more damage on the two main targets, Trump and Russia? Wouldn't Hillary have figured that out?

Technically speaking, Clinton was right, it was opposition research, which in political parlance means "digging up dirt on one's opponent." And, yes, it is perfectly legal. But the Trump dossier was much more than that. It was presented as the work of intelligence professionals who were unattached to any political organization. Had the public known that the dossier was financed by the Clinton campaign, they would have known that it was a "malicious and defamatory" hit-piece aimed at improving Clinton's chances of winning the election.

And when Hillary opines that the dossier was not released before the election, it is certainly not from lack of trying. Her colleagues made every effort to shop the piece to their friends in the media before the balloting, but all of them backed away. The report was simply too lurid and far-fetched to be believed. (In October, just weeks before the election, former M16 agent, Christopher Steele, who authored the dossier, met with reporters from The New York Times, The Washington Post, and Yahoo News.)

The Democrat leaders have not won any friends in the media by concealing their support for the dossier. According to an article at The Hill:

"'Folks involved in funding this lied about it, and with sanctimony, for a year,' Haberman tweeted to her more than 650,000 followers on Tuesday."

Clearly, Clinton did not want the American people to know the real origins of the dossier for fear that they would dismiss its findings as politically-motivated and unreliable. So they lied, and by lying, they helped to fuel the anti-Russia hysteria that's swept across the country sabotaging any chance for rapprochement between the two nuclear-armed superpowers.

But, why? Why would Hillary persist with the "hacking-collusion" meme after she had already lost the election and had nothing to gain by smearing Trump?

That's not a question that can be easily answered, but I suspect it has less to do with Hillary's presidential ambitions than it does with the way her campaign found common cause with powerful members of the intelligence community who wanted to use the hacking narrative to pursue their own geopolitical strategy of isolating, punishing and demonizing Russia. "Russian meddling" became the perfect rallying cry for the CIA's broader information operation (IO) that was designed to poison public opinion against "Russian aggression" and to reign in Trump's plans to normalize relations with Moscow.

Related Topic(s): CIA; Collusion; Hackers; Hillary Clinton; Intel; Investigation; Steele Dossier, Add Tags
Add to My Group(s)
Go To Commenting
The views expressed herein are the sole responsibility of the author and do not necessarily reflect those of this website or its editors.