Many Republicans have endorsed her. It could be because GOP stalwarts are terrified of Donald Trump. Or it could be that her policies align with theirs 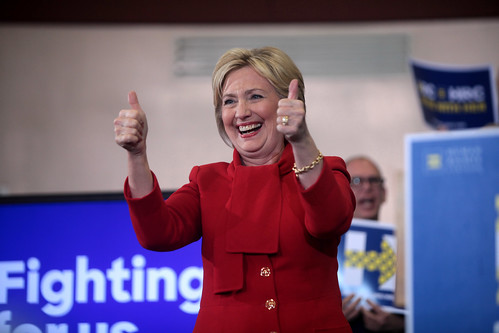 Another week, and another set of Republicans have endorsed Hillary Clinton. Is it because of existential threat of Donald Trump, or could it be because many of Clinton's potential policies conveniently line up with theirs?

Longtime Republican foreign policy stalwart and Iraq warmonger Robert Kagan became the latest neoconservative to endorse Clinton for president last week. He has even offered to host a fundraiser on her behalf, as Foreign Policy Magazine first reported on Thursday. Kagan has followed the likes of former Bush deputy secretary of state Richard Armitage and a slew of lower-profile officials in their endorsement of Clinton over Trump.

Now, it's entirely possible that these Republicans are endorsing Clinton because Trump is an unhinged maniac who has given people of all political persuasions plenty of reason to not want him anywhere near the levers of power. But here's the thing: the neocon love affair with Clinton started well before Trump was even in the discussion of Republican candidates, let alone the party's likely nominee.

Several neoconservatives have spent years gushing about Clinton's penchant for supporting basically every foreign war or military escalation in the last decade, including Kagan, who said in 2014: "I feel comfortable with her on foreign policy ... If she pursues a policy which we think she will pursue, it's something that might have been called neocon, but clearly her supporters are not going to call it that; they are going to call it something else."

Her campaign hasn't really deviated from that position, either. While she's hit Trump for being too erratic and dangerous a man to have in charge of the nuclear codes, she also promised more ground troops in the fight against Isis, expressed support for a no-fly zone in Syria (effectively a declaration of war against Assad) and called for more weapons for various rebels in the region.

Related Topic(s): Hillary Clinton; Neoconservatives; Republican, Add Tags
Add to My Group(s)
Go To Commenting
The views expressed herein are the sole responsibility of the author and do not necessarily reflect those of this website or its editors.