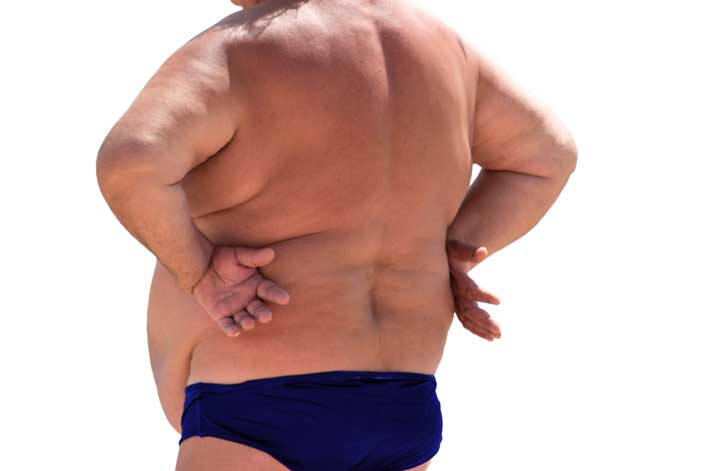 People have become so fat it has inspired mean jokes.

Lose ten pounds of ugly fat--chop off your head.

It is not just Americans who have become so fat, though they seem to be leading the way. A recent observational survey on Chicago's Michigan avenue failed to detect one normal-weight person during a 30 minute viewing sample period. Public transit cars are being redesigned because so many people now take up two seats. Visit a college campus on Parents Day and you'll see most daughters are twice the size of their mothers.

Why? The standard of thinness has practically disappeared. If everyone is 30 pounds (or more) overweight, that is how you are supposed to look. Like your friends. Like your family. Like your co-workers. Moreover, if fat is the new normal, there is no reason to hide the avoirdupois which explains the gigantic thighs spilled out of short shorts and huge rear ends showcased through leggings--taking up two seats. Once upon a time, people hid such adiposity. Not anymore.

One reason for the obesity epidemic is processed food--fatty, salty or sugary food transformed by mechanical and chemical operations to change or preserve it. It is often boxed or bagged or available at fast food outlets. Think chicken "fingers." A new study found that a typical, processed food lunch of beef ravioli, Parmesan cheese, white bread, margarine, diet lemonade and oatmeal raisin cookies made people gain two pounds a week. Do the math.

Fattening, processed food is literally engineered to be addicting. "Food technologists" in laboratories, for example, use $40,000 devices to simulate a chewing mouth to perfect chips and other junk food and create the most irresistible, mouth pleasing fats.

Our environment is also swimming with endocrine disruptors that make people fat--chemicals that interfere with hormone systems like pesticides, flame retardants and food containers. Puberty, correlated with body weight in girls, is now occurring in children as young as eight.

In 2010 babies in China were reported to be developing breasts presumably from endocrine disrupting chemicals in the food or environment. In 2011, the United Kingdom's Daily Mail observed that women's bra cup sizes were growing even when the women themselves were not gaining weight and speculated it was estrogen exposure. For years frogs and fish have been morphing into "intersex" franken creatures--losing their male characteristics, presumably from endocrine disrupters in the environment and waterways.

The ubiquity of smartphones, tablets and computers is also fattening say researchers. Teens are twice as likely to skimp on sleep and exercise and consume more sugary drinks when immersed in electronic devices. Lack of sleep alone is correlated with obesity.

Still like smoking, which is also addictive, people are capable of free will--not starting bad habits or ending them when they realize the harm. But "free will" does not mean hitting the treadmill after a junk food binge. Most gyms contain scores of overweight people who think exercise will overcome bad diets. Guess again.

Finally, the "fat acceptance" movement does no one any good. While the impulse to "destigmatize" overweight people is understandable, no one is "born" fat as they are with diseases and disabilities. Moreover, asking people to "accept" a condition that is highly correlated with Type 2 diabetes, hypertension, coronary heart disease, stroke, some cancers and all-causes of death is sheer public health lunacy.

Related Topic(s): Breasts; Environment; Estrogen; Food; Food; Girls; Intersex; OVERWEIGHT; Sleep; Smartphones, Add Tags
Add to My Group(s)
Go To Commenting
The views expressed herein are the sole responsibility of the author and do not necessarily reflect those of this website or its editors.