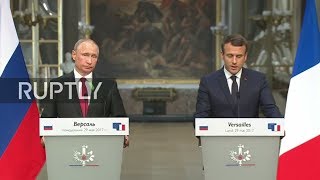 Two recent articles, one by Finian Cunningham [1] and the other by Pepe Escobar [2] relate to President Vladimir Putin's visit with new French President Emmanuel Macron this past week at the Versailles Palace outside Paris that are quite interesting with the implications each writer makes.

Both consider the meeting significant as it relates to improved French-Russian relations and more importantly France taking an independent position from "official" Washington's diktat concerning western sanctions on Russia as well as the situations in Syria and Ukraine. Macron said, "Nothing can be tackled without dialogue with Russia" on Syria and Ukraine. With regard to Ukraine the Minsk agreement-which Russia was an integral part of-must be adhered to. As for Syria, "Working together with Russia reinforces our partnership with Russia keeping a Syrian state" from being overrun by terrorists.

Until recently France and the other EU countries were in complete lock step with "official" Washington demonizing Putin, his military engagement in Syria supporting President Bashar Assad and condemning Russia's supposed invasion and annexation of Crimea. In fact there was no Russian invasion as its troops were already there as part of the Russian Black Sea Fleet while the Washington inspired coup of Ukraine President Viktor Yanukovych has been summarily dismissed along with the popular referendum by the Crimean people voting to become part of the Russian Federation as opposed to falling under the dictate of the post coup regime in Kiev.

Then at the NATO ceremony in Brussels last week President Trump scolded its leaders for not footing the bill for their own defense-which was not received well by them.

Yesterday Trump proclaimed he was withdrawing the US from the Paris Climate Accord-which France and the other EU countries all support.

Considering what's occurred this past week Trump's condescending speech in Brussels and yesterday's misguided pronouncement against the Paris climate accord are we seeing a Europe finally beginning to break free from Washington's iron grip of the continent?

German Chancellor Angela Merkel put it this way, "The times in which we can entirely depend on others are gone. This I have experienced in the last few days. We Europeans must take our destiny in our own hands". Now Merkel didn't mention Trump or the US by name in that statement but is there any doubt who she was talking about?

Could Trump be the catalyst for Europe to really take an independent course away from Washington particularly with France and Germany, the EU's top economic powerhouses taking the lead?

With Trump also denouncing the nuclear agreement with Iran which was negotiated between the P5&1, the US, Britain, France, Russia and China along with Germany could there be a further split between France and Germany and the US over relations with Iran?

Let's face it the whole new cold war with Russia is a Washington concocted invention and the EU has dutifully gone along with the charade.

European countries know the US reneged on the 1989 agreement with the Bush Sr. government and Soviet Premier Mikhail Gorbachev not to move NATO "one inch eastward" if the two Germany's were allowed to reunite and the USSR moved its military forces out of East Germany. It's been a US inspired move to expand NATO to the doorstep of Russia since 1991 when the Soviet Union ceased to exist. It also meant NATO became a relic that too lost its very reason to exist-a possible Soviet invasion of western Europe.

Russia is simply not a threat to Europe and doesn't want a war with Europe. Such a war would devastate Europe. Russia and Europe know war intimately from the carnage they suffered from Hitler's Nazi Germany.

Maybe the idea of European countries regaining their sovereignty and throwing off the shackles of "official" Washington and the deep state behind it is a mirage that won't happen despite what we've heard lately from Macron and Merkel.

But Europe needs to take steps away from Washington knowing its future economically faces eastward toward Russia and China and the latter's one belt, one road project stretching from Vladivostok to Lisbon.

Retired. The author of "DECEIT AND EXCESS IN AMERICA, HOW THE MONEYED INTERESTS HAVE STOLEN AMERICA AND HOW WE CAN GET IT BACK", Authorhouse, 2009
Related Topic(s): Angela Merkel; European Union; France; NATO; Vladimir Putin, Add Tags
Add to My Group(s)
Go To Commenting
The views expressed herein are the sole responsibility of the author and do not necessarily reflect those of this website or its editors.