Click Here to Remove All Ads
Source: The Guardian
They have to clear up the mess of war while Britain and the US, like Great Gatsby characters, retreat back into carelessness 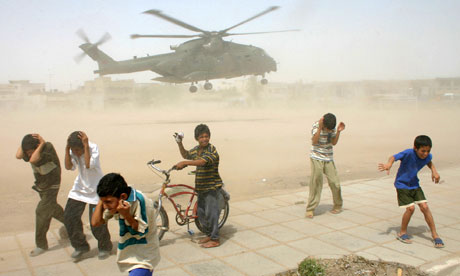 (Image by Unknown Owner)   Details   DMCA
Iraq's ministry of social affairs estimates 4.5 million children have lost one or both parents. This means 14% of the population are orphans. Photograph: Reuters

The dust in Iraq rolls down the long roads that are the desert's fingers. It gets in your eyes and nose and throat; it swirls in markets and school playgrounds, consuming children kicking a ball; and it carries, according to Dr Jawad Al-Ali, "the seeds of our death." An internationally respected cancer specialist at the Sadr teaching hospital in Basra, Dr Ali told me that in 1999, and today his warning is irrefutable. "Before the Gulf war," he said, "we had two or three cancer patients a month. Now we have 30 to 35 dying every month. Our studies indicate that 40 to 48% of the population in this area will get cancer: in five years' time to begin with, then long after. That's almost half the population. Most of my own family have it, and we have no history of the disease. It is like Chernobyl here; the genetic effects are new to us; the mushrooms grow huge; even the grapes in my garden have mutated and can't be eaten."

Along the corridor, Dr Ginan Ghalib Hassen, a paediatrician, kept a photo album of the children she was trying to save. Many had neuroblastoma. "Before the war, we saw only one case of this unusual tumour in two years," she said. "Now we have many cases, mostly with no family history. I have studied what happened in Hiroshima. The sudden increase of such congenital malformations is the same."

Among the doctors I interviewed, there was little doubt that depleted uranium shells used by the Americans and British in the Gulf war were the cause. A US military physicist assigned to clean up the Gulf war battlefield across the border in Kuwait said, "Each round fired by an A-10 Warhog attack aircraft carried over 4,500 grams of solid uranium. Well over 300 tons of DU was used. It was a form of nuclear warfare."

Although the link with cancer is always difficult to prove absolutely, the Iraqi doctors argue that "the epidemic speaks for itself." The British oncologist Karol Sikora, chief of the World Health Organisation's cancer program in the 1990s, wrote in the British Medical Journal: "Requested radiotherapy equipment, chemotherapy drugs and analgesics are consistently blocked by United States and British advisers [to the Iraq sanctions committee]." He told me, "We were specifically told [by the WHO] not to talk about the whole Iraq business. The WHO is not an organization that likes to get involved in politics."

Recently, Hans von Sponeck, former assistant secretary general of the United Nations and senior UN humanitarian official in Iraq, wrote to me: "The US government sought to prevent WHO from surveying areas in southern Iraq where depleted uranium had been used and caused serious health and environmental dangers." A WHO report, the result of a landmark study conducted with the Iraqi ministry of health, has been "delayed." Covering 10,800 households, it contains "damning evidence," says a ministry official and, according to one of its researchers, remains "top secret." The report says birth defects have risen to a "crisis" right across Iraqi society where depleted uranium and other toxic heavy metals were used by the US and Britain. Fourteen years after he sounded the alarm, Dr Jawad Al-Ali reports "phenomenal" multiple cancers in entire families.

Iraq is no longer news. Last week, the killing of 57 Iraqis in one day was a non-event compared with the murder of a British soldier in London. Yet the two atrocities are connected. Their emblem might be a lavish new movie of F. Scott Fitzgerald's The Great Gatsby. Two of the main characters, as Fitzgerald wrote, "smashed up things and creatures and retreated back into their money or their vast carelessness " and let other people clean up the mess."

The "mess" left by George Bush and Tony Blair in Iraq is a sectarian war, the bombs of 7/7 and now a man waving a bloody meat cleaver in Woolwich. Bush has retreated back into his Mickey Mouse "presidential library and museum" and Tony Blair into his jackdaw travels and his money.

Their "mess" is a crime of epic proportions, wrote Von Sponeck, referring to the Iraqi ministry of social affairs' estimate of 4.5 million children who have lost one or both parents. "This means a horrific 14% of Iraq's population are orphans," he wrote. "An estimated one million families are headed by women, most of them widows." Domestic violence and child abuse are rightly urgent issues in Britain; in Iraq the catastrophe ignited by Britain has brought violence and abuse into millions of homes.

In her book Dispatches from the Dark Side, Gareth Peirce, Britain's greatest human rights lawyer, applies the rule of law to Blair, his propagandist Alastair Campbell and his colluding cabinet. For Blair, she wrote, "human beings presumed to hold [Islamist] views, were to be disabled by any means possible, and permanently ... in Blair's language a 'virus' to be 'eliminated' and requiring 'a myriad of interventions [sic] deep into the affairs of other nations.' The very concept of war was mutated to 'our values versus theirs.'" And yet, says Peirce, "the threads of emails, internal government communiques, reveal no dissent." For foreign secretary Jack Straw, sending innocent British citizens to Guantanamo was "the best way to meet our counter-terrorism objective."

These crimes, their iniquity on a par with Woolwich, await prosecution. But who will demand it? In the kabuki theatre of Westminster politics, the faraway violence of "our values" is of no interest. Do the rest of us also turn our backs?

John Pilger grew up in Sydney, Australia. He has been a war correspondent, author and documentary film-maker. He is one of only two to win British journalism's highest award twice, for his work all over the world. On 1 November, he was awarded (more...)
Related Topic(s): Death; Health; Uranium, Add Tags
Add to My Group(s)
Go To Commenting
The views expressed herein are the sole responsibility of the author and do not necessarily reflect those of this website or its editors.