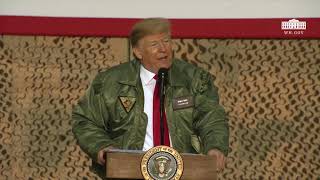 Several Iraqi political leaders Thursday (Dec 27) condemned US President Donald Trump's unannounced brief visit to Iraq as a violation of their country's sovereignty and demanded the departure of American troops from their country.

Politicians from both blocs of Iraq's divided Parliament called for a vote to expel U.S. troops and promised to schedule an extraordinary session to debate the matter.


There are some 5,200 US troops stationed in Iraq to "train and advise Iraqi forces."

In a surprise visit to US troops, Trump on Wednesday landed at the US airbase west of the Iraqi capital, Baghdad, where he thanked the soldiers for their service.

Trump did not meet any Iraqi officials during his three-hour-long stay. A scheduled meeting with Iraqi Prime Minister Adel Abdul Mahdi was scrapped and the two leaders talked instead by telephone.

Mahdi's office said in a statement that US authorities had informed Iraq's leadership of the president's visit in advance. The statement said the Iraqi prime minister and the US president held a telephonic conversation due to a "disagreement over how to conduct the meeting".

Iraqi legislators told Reuters news agency that the two leaders had disagreed over where their planned meeting should take place: Trump had asked to meet at the Ain al-Asad military base, an offer Mahdi declined.

Both main blocs of parliamentarians expressed outrage over the unannounced visit and Trump's vow that troops would remain in Iraq.

Qais Khazali, the head of the Asaib Ahl al-Haq militia, promised on Twitter that Iraq's parliament would vote to expel US forces from Iraq, or the militia and others would force them out by "other means." Khazali is an avowed opponent of the US who rose to prominence as a leader in the Shiite insurgency against the US occupation. He was detained by British and US forces in Iraq from 2007 to 2010.

Asaib Ahl al-Haq is represented in Iraq's parliament by the Binaa bloc, one of the two rival coalitions which together control nearly all the seats in the lawmaking body.

Sabah al-Saidi, the head of the other bloc, Islah, also denounced Trump's unannounced visit as a "blatant violation of Iraq's sovereignty," and called for an emergency session of Parliament to discuss Trump's visit Wednesday evening. "The American occupation of Iraq is over," al-Saida said. Trump should not be allowed to arrive "as if Iraq is a state of the United States."

Al Jazeera reported that Sabah al-Saadi, the leader of the Islah parliamentary bloc, has called for an emergency session of the Iraqi parliament "to discuss this blatant violation of Iraq's sovereignty and to stop these aggressive actions by Trump who should know his limits: The US occupation of Iraq is over".

Islah parliamentary bloc is headed by Shiite leader Muqtada al-Sadr, who has long opposed the US presence in Iraq since a Washington-led invasion toppled the government of Saddam Hussein in 2003 over weapons of mass destruction and ties to al-Qaeda that both proved non-existent.

Ahmed al-Assadi, another Iraqi lawmaker, told CNN that "the demand for the withdrawal of American forces has become a basic requirement that must be implemented as soon as possible."

"The continuation of the US administration in dealing with the presence of its forces in Iraq in this way will push the Iraqis to use all means that ensure the removal of these forces and all foreign forces from Iraqi territory," al-Assadi said.

Author and journalist. Author of Islamic Pakistan: Illusions & Reality; Islam in the Post-Cold War Era; Islam & Modernism; Islam & Muslims in the Post-9/11 America. Currently working as free lance journalist. Executive Editor of American (more...)
Related Topic(s): Condemnation; Iraq; Iraqi Government; Military; Occupation; Shiite; Soldiers; Sovereignty; Trump Iraq Visit, Add Tags
Add to My Group(s)
Go To Commenting
The views expressed herein are the sole responsibility of the author and do not necessarily reflect those of this website or its editors.