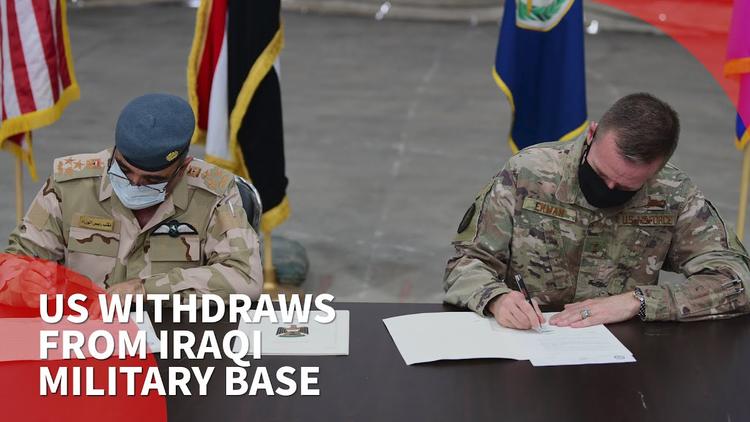 Iraqis aren't sure what to make of the report on Friday in the Wall Street Journal that the US military will reduce its troop presence by a third by November. The numbers will fall from 5,200 to 3,500 this fall. Athir Shar' in Kitabat -- suspects that even the withdrawal aims at sowing chaos in Iraq, especially if Trump gets a second term.

US troops withdrew from Camp al-Taji Air Base just north of Baghdad this week, handing it back over to Iraqi forces before being distributed to other facilities. This consolidation almost certainly had to do with an attempt to protect them from rocket attacks by Shiite militias. On March 12, two US military personnel and one British soldier were killed at al-Taji by militia rocket attacks.

Iraq's parliament voted in January to instruct the prime minister to initiate steps to have the US troops leave Iraq entirely. The recently installed prime minister, Mustafa Kadhimi, is said to have admitted the validity of the vote and to have privately promised Iraqi political parties that the Americans will leave. He has been more circumspect in public.

The parliament vote came after Trump assassinated Iranian Gen. Qasem Soleimani and Iraqi militia commander Gen. Abu Mahdi al-Muhandis, leader of the Kata'ib Hizbullah Shiite militia, at Baghdad International Airport. The parliament said that the killing violated the terms under which US troops were welcomed into Iraq to fight the ISIL terrorist group.

In 2018, the Iraqi parliament had recognized the Shiite militias as a sort of national guard and regularized them. Trump has thus been fighting with a part of the Iraqi military while maintaining he was helping the other part. It is an untenable situation. US commanders on the ground have done their best to communicate back to Washington that they cannot engage in tit-for-tat attacks on the Shiite militias and expect to have good cooperation with the Iraqi Army, which is majority Shiite.

Kadhimi was head of the Iraqi National Intelligence Service from 2016, during the joint Iraqi and US campaign to retake northern Iraq from ISIL, and he is said to continue to have concerns about whether Iraq can mop up its remnants and prevent a resurgence all on its own.

Kadhimi became prime minister earlier this year, and faced an impossible juggling act. The Shiites in parliament wanted the Americans gone. The Kurds wanted them to stay, and so did some Sunni Arabs. The Shiite militias wanted them out immediately and sometimes attacked them. Trump refused to leave and threatened Iraq with sanctions if it expelled the troops.

On the other hand, Trump said at a meeting -- with Kadhimi recently that he looked forward to the day when US troops could come out of Iraq.

So the drawdown of US troops is intended as a compromise. Kadhimi hopes that it will reassure parliament and the militias that the US is on its way out. The 3,500 US military personnel who will remain in November can still help with training the Iraqi Army and helping strike at ISIL cells in the north that continue to commit terrorism. Trump gets an apparent victory in two ways, since he is not forced out but he can boast that he is gradually winding down the US presence in Iraq. But the fact is that when he struck at Soleimani and al-Muhandis, Trump likely doomed the US military mission in Iraq.

MEMO: "US hands over military base to Iraqi forces"

Related Topic(s): Iraqi Government; Shiite; Soleimani; Trump And Iraq; Trump Con; Trump Unwelcome, Add Tags
Add to My Group(s)
Go To Commenting
The views expressed herein are the sole responsibility of the author and do not necessarily reflect those of this website or its editors.