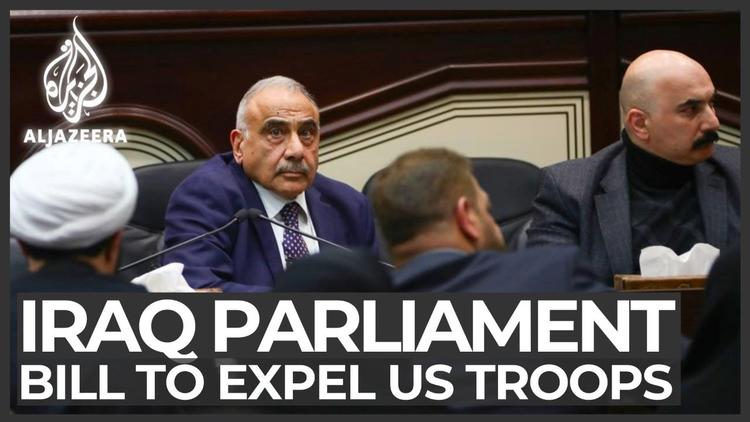 By a simple majority, the Iraqi parliament in an extraordinary session on Sunday passed a resolution requiring the executive to take steps to preserve Iraqi sovereignty by expelling US troops from the country. The Sunni and Kurdish parties made themselves scarce, and there was only just barely a quorum. All the major Shiite parties voted for the resolution. Shiites make up 60 percent of Iraq's population and they now dominate the upper echelons of the government and military.

Some members of parliament chanted "Death to America" during the session, an unprecedented event. That chant is associated with the Islamic Republic of Iran.

Iraq's parliament is relatively weak, and implementation of the resolution is up to the prime minister and his cabinet. The signs are however, that Abdulmahdi and his successor (a new prime minister is in the course of being installed) will in fact press for the US military to leave the country.

Axios reports that US State Department initially attempted to stop the parliamentary vote from taking place (presumably by pressuring its Iraqi political allies). That press failed miserably, given the angry mood of the country after the US attack on an Iraqi military officer. After the resolution passed, State pleaded with the Iraqi parliament to rethink its decision, but somehow I don't think that is going to happen.

Trump went ballistic on hearing the news and threatened to impose "sanctions like you've never seen" on Iraq if it does kick out US troops. He also demanded repayment for the costs of constructing the al-Balad Air Force Base. The US invaded Iraq illegally in 2003 and essentially stole its oil income for years to pay for its military occupation of the country.

It is highly unlikely that the world would cooperate with Trump sanctions on Iraq over this issue, and unlikely that the 4.6 million barrels a day produced by Iraq could or would be made up, so that any Trump sanctions would send petroleum prices skyrocketing. This development would be good for the health of the planet, since people would likely buy electric cars in that case.

Some Iraqi militia leaders suggested that US military training could be replaced with Russian or Chinese such help.

The Abdulmahdi government submitted a formal complaint to the UN Security Council over the US action. While the US will deploy its veto in the face of any condemnation, it will be an embarrassment to be condemned by the other members, if they take that step.

The US and other coalition forces in Iraq have announced the end of their training activities and of any active fighting of ISIL (ISIS), in favor of just protecting themselves. That is, the 5,200 US troops in Iraq are now not so much troops as hostages.

Caretaker Prime Minister Adil Abdulmahdi addressed the Parliament before the vote. He lashed the Trump administration for its assassination by hellfire missile last Friday morning of Iranian Qods Brigade commander Qasem Soleimani, along with the deputy commander of the Popular Mobilization Forces, Abu Mahdi al-Muhandis (who reported to Abdulmahdi and was a part of the Iraqi armed forces), and several others.

As Abdulmahdi told the story, Saudi Arabia had contacted him, seeking his mediation to cool down Riyadh's conflict with Iran. Abdulmahdi said he sent the Saudi message to Tehran, and then invited Soleimani to come give the reply. (Soleimani came openly to Iraq on a commercial airliner and went through passport control with his diplomatic passport. There was nothing covert about the visit). Soleimani was on his way to consultations with his host, Abdulmahdi, when Trump rubbed him out.

Abdulmahdi's account makes nonsense of everything Trump and Pompeo and Esper are saying about the circumstances of the murder of Soleimani. He wasn't coming to kill Americans. That entire meme never made any sense. There were hardly any Americans in Iraq save for the 5,200 military personnel, and it is not clear how Soleimani could have killed any of them without starting a war.

Abdulmahdi said that the United States had been authorized by Parliament to send its troops to Iraq for only two purposes, to help in the fight against the terrorist organization ISIL (ISIS), and to help train the Iraqi military. No other activity on Iraqi soil, he said, was authorized, and the United States had violated the terms of this authorization with the assassination.

Cleric Muqtada al-Sadr called on parliament to rescind its authorization for the presence of US troops and to close the US embassy. Al-Sadr's Sairun Party has 54 seats in parliament. He said merely passing a resolution in parliament is far too weak a response to what Washington had done, and urged the formation of an international militia to defend Iraqi sovereignty.

Related Topic(s): Iran; Iraqi Government; Oil; Sanctions; Troop Deployment; Trump Bully In Chief; Trump Cruelty; Trump Warmonger, Add Tags
Add to My Group(s)
Go To Commenting
The views expressed herein are the sole responsibility of the author and do not necessarily reflect those of this website or its editors.