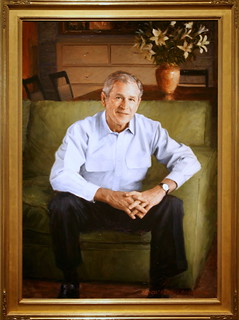 George W. Bush Administration and Republicans are responsible for Iraq. They'd like you to forget that.
(Image by cliff1066™)   Details   DMCA

As the Republican presidential demolition derby continues, the 2015 GOP candidates have settled on two central themes: hatred for President Obama and desire to send US troops back to Iraq to fight ISIS. While Republicans suffer from short-term memory loss, there's no reason the rest of us should forget what actually happened in Iraq (and why sending troops back there is a terrible idea).

1. The Iraq war was a ghastly mistake. Most political observers now believe the March 20, 2003, invasion of Iraq was the worst foreign policy decision in U.S. history.

The Bush White House had three reasons for invading Iraq. First, the invasion diverted the public's attention from the failed campaign in Afghanistan, where Dubya's people hadn't captured Osama Bin Laden or any of the others responsible for 9/11. In a March 13, 2002, news conference, Bush blurted, "I don't know where [Osama Bin Laden] is" I truly am not that concerned about him."

Because the 2002 mid-term elections were coming, Republicans needed positive momentum on their "war" on terror. They shifted America's focus from Osama Bin Laden and Al Qaeda in Afghanistan/Pakistan to Saddam Hussein in Iraq. During the first quarter of 2002 the Bush White House decided to invade Iraq. Vice President Cheney began asserting that Iraq had nuclear weapons. In June, Karl Rove and other GOP political operatives said the Republican mid-term election strategy was "war and the economy."

Dubya and his pals hated Saddam Hussein because he had once attempted to kill George Bush Senior. As a consequence, the Bush Administration fed Americans a series of lies about Iraq: Saddam Hussein was connected to Al Qaeda, had helped plan the 9/11 attacks, and had "weapons of mass destruction."

2. The Iraq war cost $4 trillion plus. The Bush Administration vastly underestimated the cost of the invasion. On September 16, 2002, White House adviser Lawrence Lindsey estimated an Iraq War would cost $200 billion. (On July 2, 2002, White House adviser Richard Perle observed, "Iraq is a very wealthy country [with] enormous oil reserves. They can finance" reconstruction of their own country.") On November 8, 2002, Secretary of Defense Donald Rumsfeld predicted the length of an Iraq War: "Five days or five weeks or five months. It certainly isn't going to last any longer than that."

The Iraq War lasted more than eight years (from March 20, 2003, to December 18, 2011.) In March of 2008, Nobel laureate economist Joseph Stiglitz released a study estimating war cost as more than $3 trillion. (In current estimates the war will cost "$4 trillion to $6 trillion.") This includes not only the direct costs of the war but also the interest on the money borrowed to finance the war plus the "medical care and disability benefits to about 70,000 soldiers injured in the conflict."

To put "$4 trillion to $6 trillion" in perspective, the US debt is estimated at $18 trillion. Guaranteeing every American a basic income at the poverty level is estimated to cost $2.1 trillion annually. (The Congressional Budget Office estimates the cost of Obamacare over ten years [2016-2025] to be $1.2 trillion.)

3. The Iraq war was mismanaged. It's no secret that George W. Bush was a failed businessman. In the 2000 campaign, Republicans attempted to shield Dubya by claiming he would be surrounded by seasoned managers, such as Dick Cheney and Donald Rumsfeld. But the reality is that Cheney and Rumsfeld were also failed managers, who made a series of awful decisions.

Not enough troops were sent into Iraq. As a result, the aftermath of the fall of the Saddam Hussein government was widespread looting and unnecessary damage to the civil infrastructure. Instead of turning control of Iraqi civil society over to Iraqis, the Bush Administration formed the Coalition Provisional Authority. In May of 2003, L. Pail Bremer, CEO of the Provisional Authority disbanded the ruling Ba'ath Party (and banned members from future employment in the public sector -- effectively firing all educated teachers) and the army. This alienated most Iraqis, particularly Sunnis.

4. A bad US management team installed a bad Iraqi management team. Following the dissolution of the Coalition Provisional Authority, the US installed a Shiite, Nuri Al-Maliki, as prime minister (who served from 2006-2014). Al-Maliki systematically repressed the already repressed Sunnis. He, in effect, spawned Isis.

5. In 2011, the Iraqi management team we installed asked us to leave the country. As Time Magazine explained at the time: "ending the U.S. troop presence in Iraq was an overwhelmingly popular demand among Iraqis, and Prime Minister Nuri al-Maliki appears to have been unwilling to take the political risk of extending it." Obama wanted to leave troops in Iraq but al-Maliki fought this by insisting on an unacceptable State of Forces agreement.

In summary, Republicans, and their progeny, are responsible for every piece of the Iraq debacle. Now they are asking us to forget that.

Bob Burnett is a Berkeley writer. In a previous life he was one of the executive founders of Cisco Systems.
Related Topic(s): Bush; Iraq; Iraq War; Iraq War Architects; Isis; Lies; Obama; President; Republican; Shiite, Add Tags
Add to My Group(s)
Go To Commenting
The views expressed herein are the sole responsibility of the author and do not necessarily reflect those of this website or its editors.