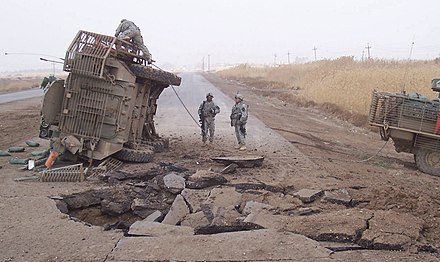 As the calendar prepared to flip from 2019 to 2020, protesters stormed the US embassy in Baghdad. As I write this, the action -- a response to US airstrikes in Iraq and Syria which killed at least 25 and wounded more than 50 -- hasn't yet become a reprise of the Iran hostage crisis of 40 years ago, but it's eerily reminiscent.

Although few Americans seem to notice, Iraq is arguably the second-longest war in US history.

Mainstream media often refer to the 18-year US occupation of Afghanistan as "America's longest war." That claim is wrong on its face.

Setting aside a century of "Indian wars" and two decades of involvement in Vietnam prior to the 1965 escalation, the Korean War handily takes the "longest war" prize: It began in 1950 and has merely been in ceasefire status, with occasional flare-ups and no final settlement, since 1953. If wars were people, the Korean War would be collecting Social Security.

The US war in Iraq is approaching its 28th birthday, also with no end in sight.

It began in January of 1991 with Operation Desert Storm ("the liberation of Kuwait" from Iraqi occupation). The 12 years between that "mother of all battles" and the 2003 US invasion were punctuated by US bombings to facilitate a Kurdish secession movement in the north, protect persecuted Shiites in the south, and provide convenient distractions from assorted Clinton administration peccadilloes.

Following the short, sharp conventional fighting phase of the invasion, the war remained a very hot conflict -- a combination of civil war and anti-occupation insurgency -- for years following US president George W. Bush's "mission accomplished" announcement in May of 2003.

A brief cooling period accompanied Barack Obama's 2009 inauguration, but by 2014 American troops (and "civilian contractors," i.e mercenaries) were once again arriving to intervene in the new regime's fight against the Islamic State of Iraq and Syria (ISIS).

The airstrikes which sparked the current protests were carried out in response to a rocket attack on a regime military base in which one of the aforementioned American mercenaries was killed.

The US government is using Iraq as a staging area for its ongoing actions in Syria and against Iran (which it blames for this specific rocket attack and for its backing of militias in Iraq in general).

US president Donald Trump talks a good "let's get out of all these stupid wars" game. But in actuality he has increased, and continues to increase, the size of US military deployments to, and the tempo of US military operations in, the Middle East and Central Asia.

Several thousand US troops remain in Iraq and the war looks likely to stretch into a fourth decade.

There is, of course, an alternative: Trump could put his money where his mouth is and begin withdrawing US troops from the region instead of continuing to pour American blood and treasure into a series of conflicts which should never have happened in the first place.

Peace on Earth? Maybe not. But the US going home and minding its own business would be a good start.

Related Topic(s): American Withdrawal Of Combat Troops From Iraq; Wars, Add Tags
Add to My Group(s)
Go To Commenting
The views expressed herein are the sole responsibility of the author and do not necessarily reflect those of this website or its editors.