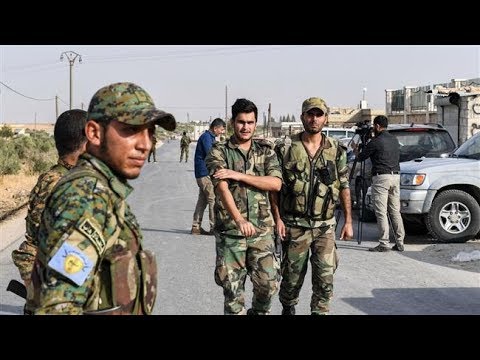 How has Trump's impetuous invitation to Turkey to invade Syria and displace America's allies against ISIL, the Syrian Kurds, issued nearly two weeks ago, been taken advantage of by Iran?

It should be noted in the first instance that Iran has its own restive Kurdish province and is no more in favor of an autonomous Kurdish region or even state in Syria than Turkey is. In fact, cooperation on keeping Kurdish separatism in check is one basis for the relatively good relations Turkey and Iran have maintained, despite their substantial differences over foreign policy. Iran and Turkey are also on the same side against Saudi Arabia and as critics of the Israeli treatment of Palestinians, and both support some Muslim Brotherhood branches (though Iran is trying to destroy the Muslim Brotherhood in Syria in specific, while Turkey champions them).

Moreover, Iran is supporting the Baathist regime of Syrian strongman Bashar al-Assad, which was always eager to end Kurdish semi-autonomy and is delighted to have been invited up into the Kurdish regions as a foil against the Turkish invasion.

So Iran isn't exactly a supporter of Rojava, the term Syrian Kurds use for their hoped-for libertarian-socialist state in northern Syria.

Ray Takeyh at the Wall Street Journal argues that Iran is not jumping up and down for joy about the turn of events in Syria, and while this is true, I would argue that Tehran is very much looking for ways to profit from the American departure (and Tehran is not unhappy about that departure).

One tangible benefit Iran has reaped is not in Syria but in Iraq, where the Kurdistan Regional Government is swinging to the mullahs in Tehran out of fear that the US is too fickle an ally, according to Newsweek.

Iranian foreign ministry spokesman Abbas Mousavi said this week that any establishment of Turkish military bases on Syrian soil is "unacceptable." This stance is in line with that of Iran's client, al-Assad. Syria isn't sorry that Turkey's power play has pushed the Kurds into the arms of Damascus, but they wouldn't want to see Turkey annex parts of Syria either permanently or even in the medium term.

Mousavi also offered Iran's good offices in negotiations between Syria, Turkey and the Kurds. Iranian foreign minister Javad Zarif has been on the phone with his Russian and Turkish and Syrian counterparts.

One important role Iran might play, according to Zarif, is to help Turkey and Syria renegotiate the 1998 Adana Agreement. In that agreement, Damascus allowed the Turkish military to come 15 km into Syria at will to fight what the two governments called Kurdish terrorism. Turkey has cited Adana in its current invasion of northern Syrian, though it is going twice as deep as Adana allowed, and it is planning to resettle Sunni Arabs in Kudish villages on a grand scale -- something the Adana accords did not envision.

The Adana agreement can only be renegotiated if Turkish officials are willing to talk directly to the al-Assad government. Since the 2011 Syrian revolution and the Baath regime's brutal crackdown on the Sunni Arab rebels and the Muslim Brotherhood who joined the uprising, pro-political Islam Turkey has broken off relations with Damascus and joined the effort to overthrow al-Assad. Zarif is offering Iran's good offices in bringing Turkish and Syrian negotiators together, and Iran is one of the few regional actors with credibility on both sides.

Iran was also happy about the agreement reached between Russia and Turkey, which essentially ended the Turkish invasion in return for Russian military police patrolling the Syrian-Turkish border in the northeast so as to ensure that Turkey was not attacked by radical Kurds from Syrian territory.

Iran is therefore pretty happy with this outcome. A Kurdish mini-state has been forestalled. Iran's client, the al-Assad state, is reasserting itself in the Kurdish northeast. Iran's ally, Russia, has been drawn into providing patrols and security in the northeast.

Iran's main fight is actually in Syria's northwest, against the Sunni Arab fundamentalists. Iran is committed to helping the Syrian regime ultimately recover Idlib Province, where the fundamentalist militias have congregated. Since Turkey wishes to act as protector of these Sunni Muslim forces, it benefits Iran to have Ankara's attention instead on the northeast and the Kurds. Moreover, it may be that a quid quo pro can be worked out where Turkey is satisfied that the alleged Kurdish threat has been dealt with by Russia and al-Assad, in return for which Turkey will allow an Idlib operation to go forward as long as it does not drive more Syrian refugees into Turkey. That is, any such operation would have to seek to reincorporate the Sunni Arabs up there, involving some diplomacy as well as military action, rather than seeking to displace them and make them Erdogan's problem.

Related Topic(s): Iran; Iran Russia Alliance; Iranian Foreign Minister Javad Zarif; Sunni; Syria; Syrian Arab Army; Trump Untrustworthy, Add Tags
Add to My Group(s)
Go To Commenting
The views expressed herein are the sole responsibility of the author and do not necessarily reflect those of this website or its editors.